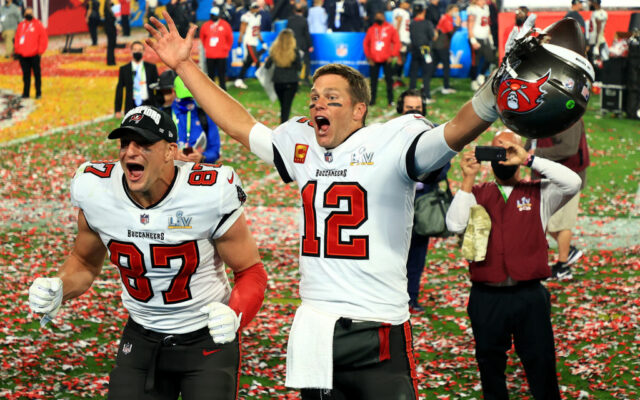 The game started off pretty uneventful, and it ended with a blowout.

Tampa Bay and Kansas City opened the game with a combined three punts. KC scored the first points with a field goal, but that would be the only lead for the Chiefs.

The Bucs, however, scored on five of their next six drives, including four consecutive possessions.

Tom Brady found former Patriot teammates three times for TDs — two for Rob Gronkowski, one for Antonio Brown — in the first half.

Leonard Fournette scored the only other Buccaneers TD, which put TB up 28-9 in the third quarter.

The Bucs defense, led by defensive coordinator Todd Bowles, was relentless. They held Mahomes out of the end zone all game.

Even when the game was in hand, Devin White picked Mahomes off at the goal line to seal it for the Bucs.

Last year’s Super Bowl MVP had two interceptions, and he finished with 270 yards but most of those came in garbage time.

The Chiefs offensive line couldn’t block anything the Bucs sent, four rushers, five rushers, etc. it didn’t matter. Bravo to Bowles for his game plan and to the players for the execution.

Also, it would be a mistake to not mention Bucs offensive coordinator Byron Leftwich. He and head coach Bruce Arians called a brilliant game on offense.

Leftwich and Bowles seemed to call the right play at the right time almost the entire game. Both should be head coaches down the road.

With the victory, Brady now has more Super Bowl wins than any individual franchise in the NFL. He was also named Super Bowl MVP for the fifth time in his career, which just adds to the NFL record he already owned.

Since coaches can’t win the MVP award, nor can the whole defense, Brady was the only choice left. Even though, personally, I’d make an argument for Leonard Fournette.

TB12 finished with 209 yards on 21-of-29 passing and three touchdown passes. Fournette finished with 16 carries, 89 rushing yards and a touchdown to go with four catches for 46 yards.

Rob Gronkowski showed up big with six catches for 67 yards and the aforementioned two first half touchdowns.