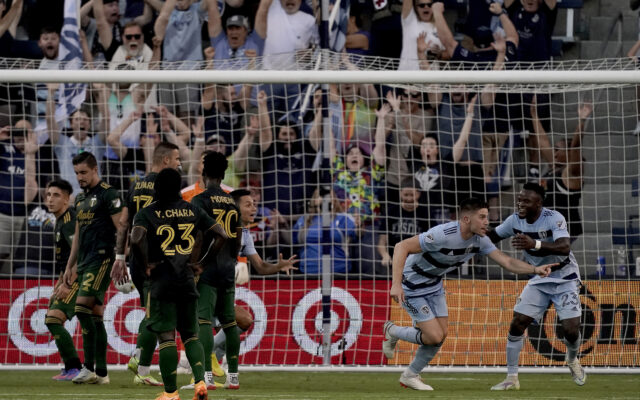 Sporting Kansas City defender Andreu Fontàs, second from right, celebrates with forward William Agada (23) after scoring a goal during the first half of an MLS soccer match against the Portland Timbers Sunday, Aug. 21, 2022, in Kansas City, Kan. (AP Photo/Charlie Riedel)

It was a Sunday to forget for the Portland Timbers. Sporting Kansas City collected three points with a dominating 4-1 victory at home against Portland.

Sporting KC scored three goals in the final 15 minutes of the first half and went into halftime leading 3-0. William Agada put the finishing touches on Portland with his second goal of the game in the 75th minute. Sebastian Blanco claimed a goal in the 90th minute to make it 4-1.

With the loss, the Timbers are currently sitting in 10th place in the Western Conference with 33 points. Portland has 7 matches left to go and will next battle rival Seattle at Providence Park on Friday, August 26th at 7:00 pm.