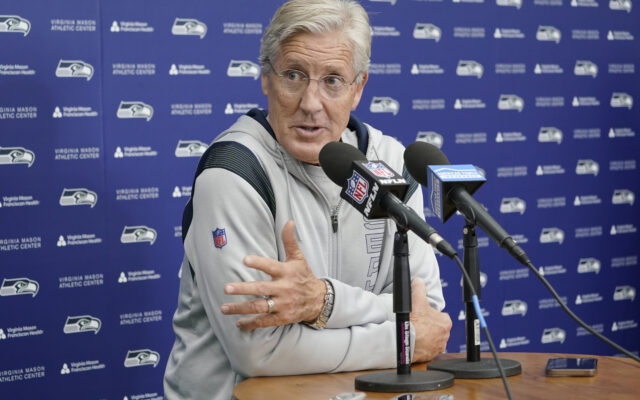 The Seattle Seahawks will welcome Russell Wilson and the Denver Broncos in the first game of the season, Sept. 12th, on Monday Night Football.

That matchup delivered the most buzz in the leadup to Thursday night’s NFL schedule release.

Following one of the most highly anticipated primetime matchups of the season, the Seahawks will go on the road for their first divisional game to take on the 49ers.

The Seahawks play seven true road games this season, with another “road” game coming Nov. 13th in Germany against Tom Brady and the Buccaneers.

Seattle will play a total of nine home games.  NFC teams get the extra home game this season after the AFC had the extra game at home last season.

Christmas Day falls on a Sunday this year, but the Seahawks will play the day prior on Christmas Eve in Kansas City against Patrick Mahomes and the Chiefs.

Seattle is currently scheduled for just one other primetime game to pair with their Monday Night opener against Wilson’s Broncos.  The Hawks are on Thursday Night Football on Amazon Prime on Dec. 15th hosting the 49ers.

The full Seahawks 2022 schedule is as follows: