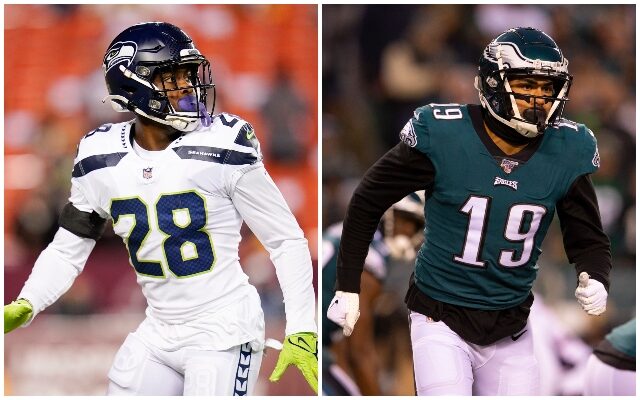 Former Oregon Ducks defensive back Ugo Amadi has been traded from the Seattle Seahawks to the Philadelphia Eagles in exchange for former Stanford product J.J. Arcega-Whiteside.

Both players were 2019 draft choices of their respective squads, but were considered longshots to make their final rosters this season.

Seattle selected Amadi in the fourth round of the 2019 draft, and played him chiefly at nickel back and free safety.  He has played in 47 games over three seasons.

Philadelphia selected Arcega-Whiteside in the second round of that same draft, but the 6’2” 237-lb receiver only totaled 16 catches for 297 yards and one touchdown over three seasons with the Eagles, who moved him to tight end earlier this offseason.  Seattle reportedly aims to utilize Arcega-Whiteside as a hybrid wide receiver/tight end in offensive coordinator Shane Waldron’s scheme.

The Seahawks are dealing with injuries at receiver to Dee Eskridge (hamstring), Freddie Swain (back), Marquise Goodwin (hamstring) and Cody Thompson (shoulder).  The Eagles can utilize Amadi’s versatility in the secondary to help bolster depth at safety.