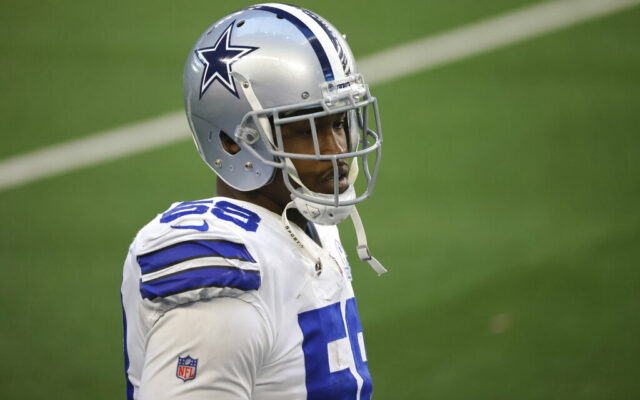 The Seattle Seahawks have pursued Aldon Smith before, and on Thursday they got him, the team announced.

The deal is a one-year contract, according to multiple reports. Full terms were not disclosed.

Apparently Seattle tried to trade for Smith last season, but instead they waited to snag him during free agency, per NFL Network’s Ian Rapoport.

If you forgot, Smith spent four seasons suspended from the NFL after multiple off field issues.

The Timeline of Issues

He was arrested on suspicion of DUI in January 2012 and September 2013. Then, he turned himself in on three felony counts of possessing illegal assault weapons in October 2013.

Next, he was arrested on suspicion of making false bomb threats at LA International Airport in April 2014. No charges were filed in that case.

The NFL suspended him in August 2014 for nine games after violating the league’s personal-conduct policy and the substance-abuse policy.

Finally, he was arrested again on hit-and-run, DUI and vandalism charges on Aug. 6, 2015. The 49ers released him the next day.

Smith signed with the Raiders in November 2015, but he was suspended again. The NFL gave him a year bad for violating the policy and program for substances of abuse, which stemmed from the August 2015 issues.

After all that, Smith signed with the Dallas Cowboys in March 2020.

Last season, he started strong with three sacks in Week 3 against … Russell Wilson and the Seahawks. However, Smith only five total sacks by year’s end.

Overall, Smith was decent from the D-line. He finished with 48 total tackles, 33 QB pressures, five tackles for loss and two fumble recoveries — he returned one for a touchdown.

If the Seahawks can also re-sign K.J. Wright, their defense should be solid next season. However, John Clayton (aka the professor) revealed this week he’s “not getting good vibes” about Wright returning to Seattle.