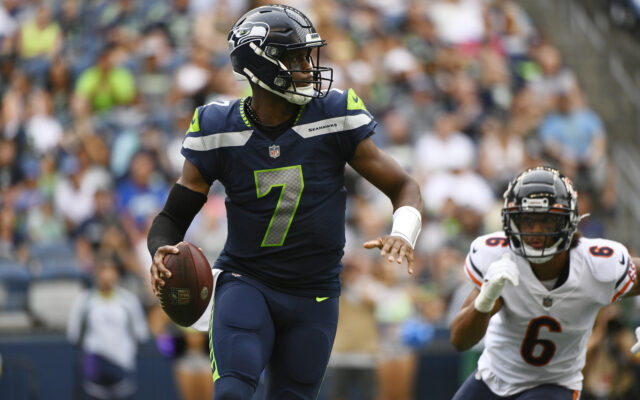 The Seahawks lost to the Chicago Bears 27-11 last night at Lumen Field.  But that wasn’t the most important part of the game.  With quarterback, Drew Lock, already out because of Covid 19.  Veteran Geno Smith had an opportunity to capitalize and earn the starting quarterback position.  Smith was slated to play into the third quarter but banged his knee in the first half. He was icing the knee while Jacob Eason took all the snaps after halftime.  The Concern happened when Geno Smith was seen with an ice bag on his knee when he came out of the tunnel for the second half.

QB updates:
— #Seahawks coach Pete Carroll told reporters QB Geno Smith banged his knee, but could have returned.
— Drew Lock was "really sick" with COVID, per Carroll. He can exit the protocol on Sunday, and the thought was Lock would start in W3, but if he's not healthy…

The good news is Coach Pete Carroll said that Smith could have played if it was a regular season game and that it wasn’t a serious injury.  Smith went 10/18 for just 112 yards, no touchdowns and a 74.3 passer rating.  So while the Smith injury isn’t serious.  The Seahawks quarterback situation is still a big question with the regular season just around the corner.