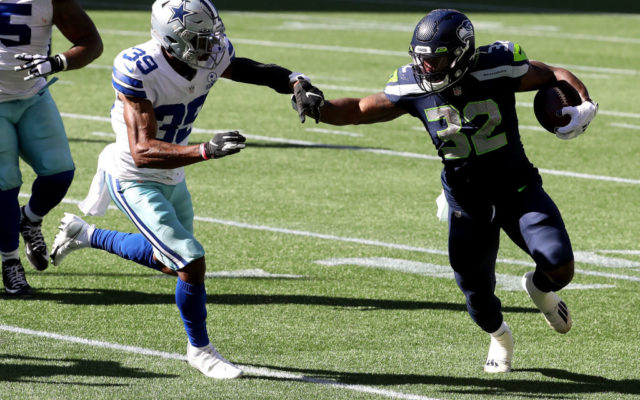 Seattle Seahawks head coach Pete Carroll is “really pissed” about how Chris Carson got hurt on Sunday. The veteran running back is out 1-2 weeks, according to ESPN’s Adam Schefter.

Carson was injured when he was taken down with a “gator roll” tackle. Dallas’ DT Trysten Hill grabbed Carson from behind and with both players on the ground continued rolling over while still holding Carson’s legs.

“Yeah, I was really pissed about that one,” Carroll said on 710 ESPN Seattle Monday morning. “I don’t know what’s going to happen with that, but I was pissed because that guy hurt him, unfortunately.”

Carson’s teammates were as upset as their head coach.

@NFL this needs to be addressed ASAP!! Doing dirty dumb malicious shit like this can end someone’s season! This is clearly intentional and getting fined isn’t enough. Im all for guys playing hard but I have zero tolerance for this @NFL pic.twitter.com/cdllxdiAVi

🗣 should’ve been thrown out! https://t.co/asr6nGaNgi

The team wants to see how Carson recovers this week before Week 4 in Miami.

Injuries piled up for the Seahawks in Week 3 where safety Jamal Adams (groin), D-lineman Jordyn Brooks (knee) and right guard Damien Lewis (ankle), along with Carson all went down with injuries.