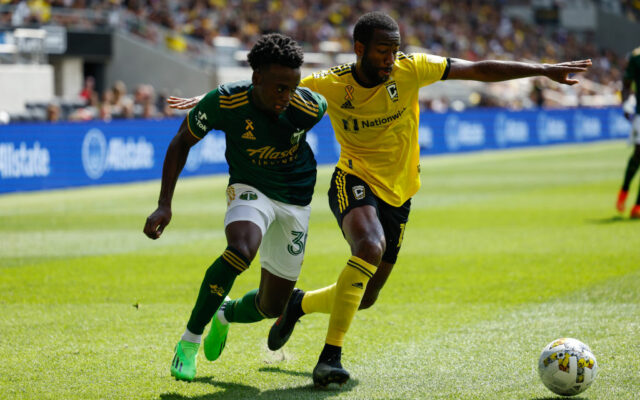 COLUMBUS, OH - SEPTEMBER 18: Columbus Crew forward Kevin Molino (13) with the ball challenged by Portland Timbers midfielder Santiago Moreno (30) in a match between the Columbus Crew and the Portland Timbers on September 18, 2022, at Lower.com Field in Columbus, Ohio. (Photo by Graham Stokes/Icon Sportswire via Getty Images)

The Portland Timbers earned a massive road point in Columbus on Sunday thanks to a Santiago Moreno stunning equalizer deep into second-half stoppage time, tying the Crew 1-1.

On Monday, Moreno was named to the MLS Team of the Week.

The 22-year-old Moreno recorded his 7th goal of the season, and is now tied with Sebastian Blanco for the team lead in points with 22.  Both players have identical marks of seven goals and eight assists on the year.

The Timbers are unbeaten in five straight matches (4 win, 1 draw), and sit in fifth in the Western Conference standings on 46 points.  They’re one point shy of Nashville (47pts), who have the fourth position, and would be the final team hosting a playoff match.

There are two matches left in the regular season, with the Timbers hosting LAFC (Oct. 2nd) on visiting Real Salt Lake (Oct. 9th) in their quest to return to the playoffs for the fifth straight season.