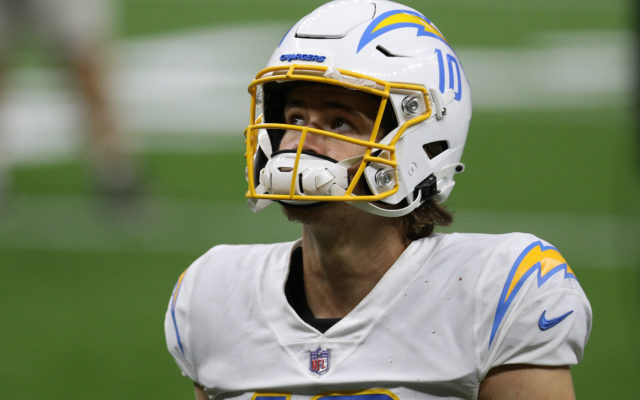 Justin Herbert did everything he could to help his team break a three-game losing streak, and notch the first win on his NFL belt Monday night against the New Orleans Saints.

Herbert threw for a career-high four touchdown passes, making him the only rookie quarterback in NFL history to pass for four touchdowns on Monday Night Football.

The 1st rookie in NFL history to throw 4 touchdowns on #MNF?

With under four minutes to play in the fourth quarter and the game tied 20-20, Herbert threw a rope to wide receiver Mike Williams who took it the rest of the way for the go-ahead 64-yard touchdown. The score made it 27-20 Chargers with just 3:40 to play, and the Los Angeles defense needed one stop to secure Herbert’s first NFL win.

Saints’ quarterback Drew Brees was no stranger to the situation, leading the offense on an eight-play 73-yard drive for the game-tying touchdown. The Saints did not face a third down on the drive until Taysom Hill’s 9-yard touchdown run on third-and-four, which would eventually result in sending the game to overtime.

Los Angeles did have an opportunity to win the game in regulation, as Herbert found Mike Williams once again for a 29-yard pass play setting the Chargers up at the Saints 32-yard line with just 0:08 remaining on the clock. Chargers’ kicker Michael Badgley hit the right upright on the potential game-winning 50-yard field goal.

In overtime, the Chargers defense could not force a third down until the Saints were deep in Los Angeles territory at the 18-yard line. Brees missed Emmanuel Sanders on third-and-six, bringing on kicker Will Lutz who made the go-ahead field go.

Herbert and the Chargers offense were unable to answer, turning the ball over on downs after failing to convert a fourth-and-six at their own 44-yard line. Saints won 30-27.

Justin Herbert has now faced Patrick Mahomes, Tom Brady, and Drew Brees, and has helped his team to a lead in the fourth quarter against all of them.