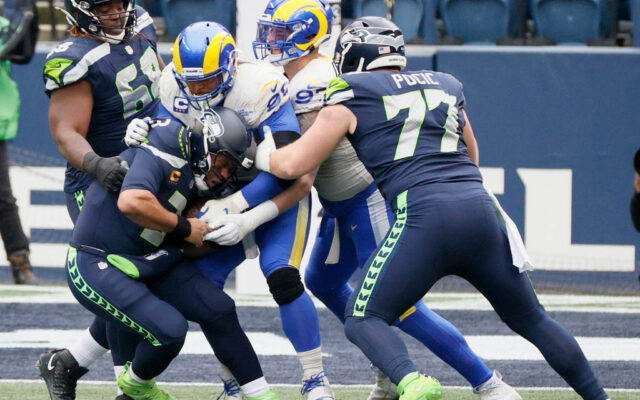 If there’s one team that seems to have the Seahawks number, it’s the Rams.

Even dating back to their time in St. Louis, the Rams always play Seattle tough and almost always beat them at least once a year.

The two teams have split their regular season matchups every year except for three times since 2012.

Now, the outlier — that ruins everything — is 2015 when the Rams swept Seattle, but then-St. Louis missed the playoffs at 7-9.

Okay, that’s enough history, let’s get to the game.

To be honest, the game felt very stagnant in the beginning, I mean it was 3-0 Rams after the first quarter. No one looked good on either offense.

The Rams started John Wolford — who got crunched by Jamal Adams early on and gave way to Jared Goff and his broken thumb — while Wilson just couldn’t get going.

Anyway, it was 6-3 before Seattle tried to force the ball to Metcalf and suddenly the Rams were on the board with the first TD of the game: the pick-six.

Honestly, when that happened I said to myself “I don’t need to watch anymore.” Drastic? Sure. However, I’ve seen this Seahawks team make stupid mistakes, which this wasn’t necessarily, but the pick-six felt like a momentum builder for LA.

You can argue that Seattle got right back in it when they scored a nice touchdown to Metcalf on the next drive, but there was something about that pick-six that made me go “that’s all the Rams need.”

Ultimately, I was wrong that it was ALL they needed, but the Rams scored their first offensive touchdown on the next drive and suddenly led 20-10 at halftime.

Then, the teams traded field goals, and eventually traded touchdowns in the second half. I never felt like Seattle had a real chance after that pick-six, and they played like it too.

Wilson was forcing passes, and he was constantly under pressure. Even with Aaron Donald in the locker room, the Seahawks offense did literally nothing for three straight drives — nine plays for three yards.

Jared Goff had four good fingers on his throwing hand, and the broken one (which just had surgery) was the one he needed to really grip the ball, his thumb. So, even with subpar grip, he was still better than Wilson.

Cam Akers carried LA for most of the game, and he ended with 131 yards and a touchdown.

The only shoutout I’ll give to Seattle is Bobby Wagner. That dude was everywhere — 16 tackles (11 solo), a sack and a tackle for loss.

Otherwise, the Seahawks played like garbage and didn’t deserve to move on.

For Seattle, an offseason with disappointment firmly in the rearview mirror. Pete Carroll signed an extension during the season, so for those that want him fired, he’s not going anywhere … sorry.

Also, the Seahawks won’t have much room to add top free agents. According to Spotrac.com, Seattle will currently have just over $15 million in cap space for 2021.

In other words, it could take a phenomenal draft or some trades from John Schneider (maybe both) if the Seahawks are going to improve enough to truly compete next season.

On top of that, guys like K.J. Wright, Bruce Irvin, Ethan Pocic, Shaquill Griffin, and more are all free agents heading into 2021. Oof.

As for the Rams, they get to play the No. 1 seed in the NFC and the odds on favorite for NFL MVP, Green Bay and Aaron Rodgers. Good luck with that Los Angeles.