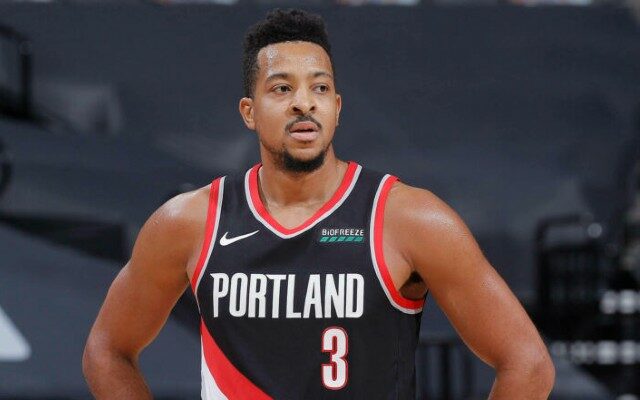 Per reports, CJ McCollum is likely on the move, involved in a trade that would send him to the New Orleans Pelicans (AP Images)

If the reports come to fruition, CJ McCollum’s time with the Portland Trail Blazers is coming to an end.

Reports on twitter Tuesday morning from ESPN’s Adrian Wojnarowski and The Athletic’s Shams Charania indicate the Blazers are in serious talks with the New Orleans Pelicans on a deal that would send McCollum to New Orleans, with Josh Hart and draft compensation as part of the return package for Portland.

The deal is still being finalized, but could be a done deal as soon as today.

Update: As part of the McCollum-Hart-draft compensation trade, Portland is reportedly sending Larry Nance, Jr. and Tony Snell to the Pelicans, while acquiring Nickeil Alexander-Walker and Tomas Satoransky.

Tough to deal from a place of weakness and get value. Blazers should have traded CJ a few seasons ago. https://t.co/UzbJPaipnZ

Probably should’ve done this a few years ago for a bigger return, eh? https://t.co/Q8fo0sbcVB

There’s optimism a deal will be completed — perhaps as soon as today — but there’s still work to be done to reach an agreement, sources tell ESPN. https://t.co/62zt0MWDXv