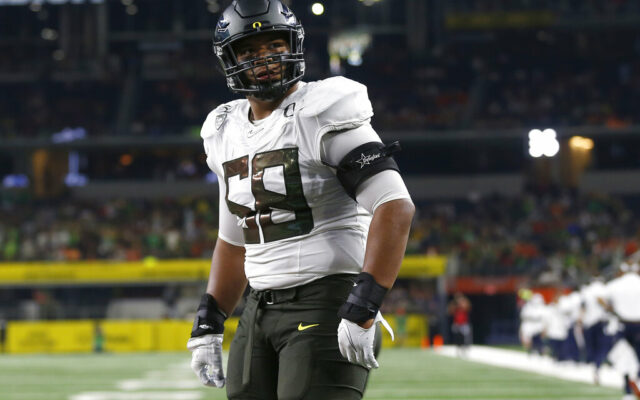 As the NFL Draft approaches, the rumor mill continues to spin on where Penei Sewell could end up.

The latest report comes from Adam Beasley of the Miami Herald linking the Dolphins to the former Oregon star left tackle.

The Dolphins are indeed moving Robert Hunt to right guard and Penei Sewell is a possibility at pick 6, source tells the Miami Herald.

However, Beasley says Sewell to the Dolphins at No. 6 could happen if “things break a certain way.”

From an outsider’s perspective, this sounds like it could be a potential smokescreen by Miami. In fact, Miami Herald vet Barry Jackson seems to refute Beasley.

Source who has trust of Dolphins front office & has spoken to them this week said he would be beyond stunned if Sewell was Fins pick, regardless of Flowers trade. Keep in mind, as @WingfieldNFL noted, that Kindley played a lot of LG at Ga. So Kindley at LG,Hunt at RG makes sense

As usual, the NFL Draft season always provides entertainment because teams use the media as a way to confuse and stress out the other teams interested in certain prospects.

Miami could have zero interest in Sewell, but Beasley’s report could net the Dolphins some draft picks if another team is desperate to trade up and draft the former Duck.