Report: Herbert Has Video Conference with Detroit Lions Ahead of 2020 NFL Draft 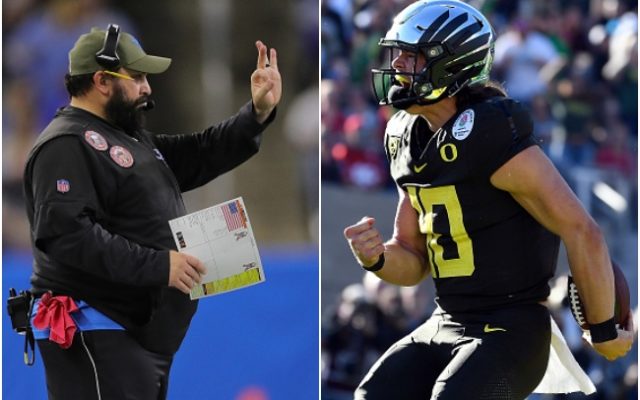 As the first ever virtual NFL Draft approaches it’s April 24th start date, former Oregon quarterback Justin Herbert is expected to be drafted by one of three teams. However, a fourth team seems to have entered the mix.

The Detroit Lions conducted a video conference with Herbert, and will reportedly do the same with former Alabama quarterback, Tua Tagovailoa.

The question is, are the Lions joining the Bengals, Dolphins, and Chargers as teams most likely to draft the two young quarterbacks? Or could the Lions just be looking to drive up the price, with the possibility of trading away their third overall pick?

Currently, Detroit has veteran quarterback Matthew Stafford, who was playing well until a back injury forced him to the sideline for the final seven games of the 2019 season. Lions owner Martha Firestone Ford issued a “win now” mandate to head coach Matt Patricia and general manager Bob Quinn. The good news is that Stafford is expected to be ready for training camp.

They aren’t likely to select a quarterback with the number three overall pick, as they are looking to select a player who can help them on defense immediately. Ohio State cornerback Jeff Okudah is the guy they have had their eyes on, but they believe he could still be available if they trade down. A trade with the Dolphins, Chargers, or any other team interested in grabbing a franchise quarterback in this year’s draft is still a very real possibility.