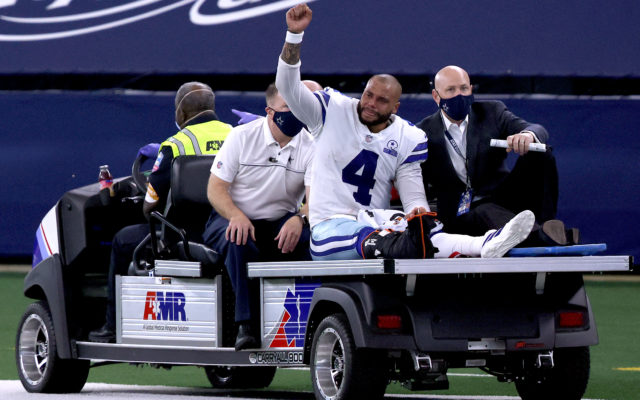 The Dallas Cowboys capped off a thrilling 37-34 victory over the New York Giants on Sunday afternoon, but unfortunately lost their star quarterback for what looks to begin the remainder of the season.

Prescott suffered a compound fracture and dislocation of his right ankle midway through the third quarter, when he was tackled by Giants defensive back Logan Ryan. The injury was bad enough that it required immediate surgery on Sunday night.

Reports have come out saying that surgery to Prescott’s ankle has been successful, and a timetable for recovery is still to be determined.

ESPN’s Adam Schefter had the latest:

Cowboys’ QB Dak Prescott is now out of surgery for a compound fracture and dislocation of his right ankle, and the surgery that went “very well”, per a source. Cowboys Head Team Orthopedist Dan Cooper brought in noted foot and ankle doctor, Gene Curry, to do the repair tonight.

Veteran back-up quarterback Andy Dalton stepped in to replace Prescott, finishing the game 9-of-11 for 111 yards, which included a 38-yard pass to Michael Gallup which set up the game-winning field goal with just seconds remaining.