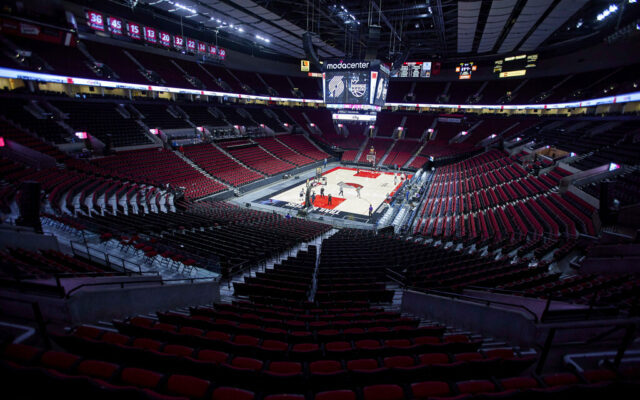 UPDATE (10:55 a.m.): The team announces fans will be allowed in Moda starting on Friday. Tickets go on sale for all remaining  games starting Thursday morning.

The Trail Blazers make it official. Fans back in Moda on Friday. #RipCity https://t.co/BvNQG4fiAB

ORIGINAL (9:46 a.m.): Our own John Canzano reported late Tuesday night a source told him the Portland Trail Blazers will be granted up to 10 percent capacity inside the Moda Center for their final four home regular season games.

Trail Blazers team president Chris McGowan is set to join Canzano on Wednesday’s edition of the Bald Faced Truth. So, he could make the news official; the State of Oregon has yet to confirm the report.

This all seemed to get started when Portland star Damian Lillard — and then CJ McCollum — made his feelings known on Twitter and within hours Canzano broke the news.

So we gone be the only damn team in the whole league with no fans .

Wonder why we got a better record on the road 🤣 https://t.co/2axVRj9xIv

Source in Salem tells me the @trailblazers have been approved for 10 percent fans at Moda Center beginning on Friday.

I expect an official announcement tomorrow AM.

Portland hasn’t had a single fan at home games this season. They are one of three teams to play without fans in their home arena. Oklahoma City will continue without fans, but Chicago will open to fans this week.

There is yet to be an official announcement from the Governor’s office.

Canzano also says the people able to get tickets are expected to be season ticket holders (based on tenure), player’s families, sponsors and the general public. Ten percent of the Moda Center is just shy of 2,000 fans — full capacity for the arena is listed as 19,980.

This story will be updated as more information becomes available.