Reaction to Blazers getting screwed by refs in Utah 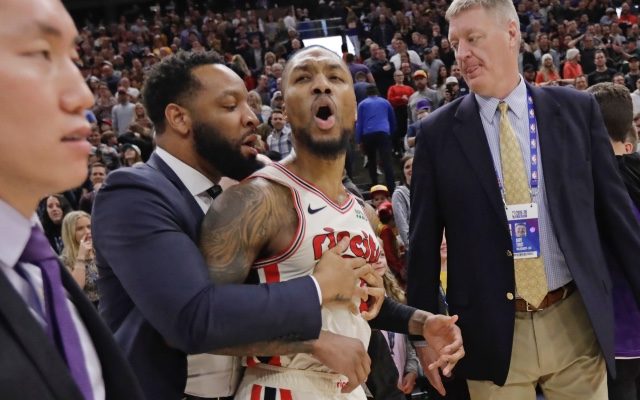 NBA refs struck again Friday night in Utah, failing to call a clear goal-tending against Rudy Gobert that would have tied the game for Portland (AP Images).

The Blazers got jobbed by Josh Tivitz and crew on Friday night in Utah.  A clear goal-tending on Rudy Gobert was not only missed by the officials on the floor, but also was not able to be reviewed by the NBA’s Command Center, and kept the Blazers from tying the game in the closing seconds in Salt Lake City.

Every game matters as the Blazers dig in their heels to try and climb back into the playoff race.  Even in altitude, on a back-to-back, with no Hassan Whiteside, Dame willed the team to the brink of victory, before the officials snatched it away.

Reaction from across the league came pouring in shortly thereafter:

Damian Lillard is HEATED after the refs missed a goaltending call which resulted in a Blazers loss pic.twitter.com/SOkvELhVtS

“We’re in a playoff race and they cost us a game, on an easy call.”@Dame_Lillard on the missed goaltending call pic.twitter.com/pMdZAa5lEz

Replay is supposed to be there to correct an error. This was a failure on multiple levels.

One of the biggest missed calls I’ve ever seen. Also, one of the most inspiring @trailblazers performances I’ve seen. Tons of heart, skill, & will! https://t.co/SffHSDpDgs

I love basketball because I think that’s the sport that gives you get the greatest combination of skill and athleticism. But the @NBA and @NBAOfficial are such a joke sometimes. I might as well be watching pro wrestling.

Now, back to your regularly scheduled LeBron highlight