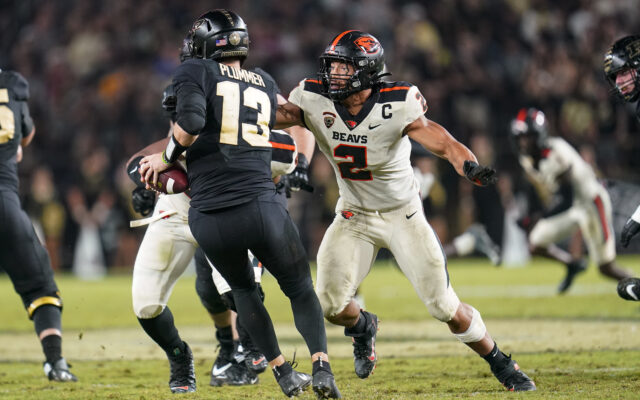 In the 500th game at Ross-Ade Stadium, Purdue made sure it was a party, taking down Oregon State 30-21 Saturday night.

In a game that matched even-class teams from the BIG-10 and PAC 12, all eyes were on last year’s PAC-12 all second-team QB Sam Noyer. The transfer from Colorado to Oregon State completed his first pass in Beaver colors and in the second Beaver drive his 23-yard completion to Trevon Bradford got OSU in the red zone. After the chunk gain, B.J Baylor had a silky 9-yard trot for the first touchdown of the affair.

After the touchdown on the second drive, OSU had just 46 yards of total first-half offense and was one of seven on third downs during the half. Purdue scored 13 unanswered points, including a field goal with 11 seconds left in the half off the back of a Noyer interception at midfield.

The momentum was certainly leaning towards Purdue and although Oregon State looked great to start and the touchdown drive was a thing of beauty, the remainder of the first half was filled with poor protection and negative offense for Noyer and the Beavers. Noyer went 7/14, 65 yards, 0TD, with 1INT in the first half.

Purdue started the second half well, marching with ease into OSU territory but ultimately had to settle for a field goal attempt. Purdue lined up for the 43-yarder and it was a well-executed fake field goal that saw Payne Durham catch a ball for a perceived first down but Jaydon Grant snatched the ball right from the grill Durham before he could come down.

Oregon State on the drive after the turnover went aggressive but failed to convert on a fourth and two at midfield affording Purdue great field possession. A nice catch by David Bell, who had 134 yards on the night, brought Purdue within the three yard-line but OSU stood strong on the goal line forcing Purdue to settle for three.

After Purdue went up 16-7 deep in the third quarter, QB Chance Nolan came in for Sam Noyer and tried to make the difference. Nolan quickly made an impact leading to a Tyjon Lindsey 7-yard sweep run TD on Nolan’s first drive of the game.

The QB swap was a smart one with Nolan putting up 157 yards in just over a quarter of work.

Durham got his revenge on Grant and the OSU defense by scoring a TD to go up two scores with just under five minutes left. The Beavers didn’t fold and Chance Nolan had an impressive 45-yard toss to Flemings to get within the five yard-line. Seconds later, B.J Baylor punched it in for his second score of the night.

Jack Plummer squashed Beaver hopes, connecting with Durham again for a 50-yard TD with two minutes to go, which wrapped up the affair. Durham hauled in seven balls for 120 yards.

Next up for Oregon State is their home opener against Hawai’i on Saturday at 8 PM.