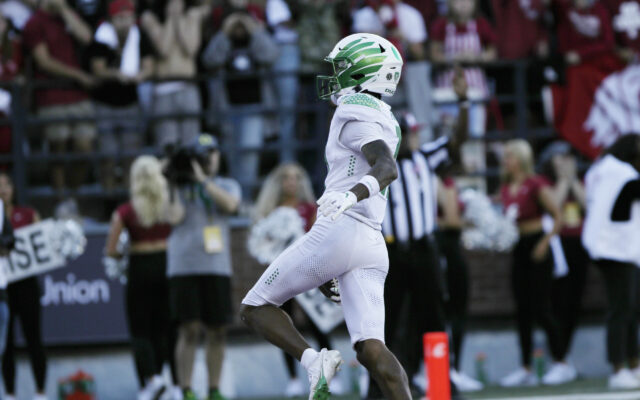 Oregon wide receiver Troy Franklin runs for a touchdown during the second half of an NCAA college football game against Washington State, Saturday, Sept. 24, 2022, in Pullman, Wash. (AP Photo/Young Kwak)

The No. 15 Oregon Ducks used a 29-point fourth quarter to rally from a late deficit and stun a previously unbeaten Washington State team, 44-41 in Pullman on Saturday.

With just 6:41 remaining in the game, Oregon trailed 34-22.  But the Ducks refused to quit, scoring a touchdown, forcing a punt, and scoring another touchdown and adding a two-point conversion, all in the span of just 5:12 of game time, to grab a 37-34 lead with just over a minute left.

The Cougars still had a pair of timeouts and 1:20 on the clock to grab a game-tying field goal or take the lead.  But quarterback Cam Ward, after delivering a tremendous performance all game, threw an ill-advised pass that was intercepted and returned for a touchdown by Ducks edge rusher Mase Funa who returned it for a touchdown, all but sealing the dramatic comeback win.

WSU added a late score to cover the spread, but it was Oregon who left with the outright victory to open Pac-12 conference play.

Quarterback Bo Nix threw for 427 yards, 3 touchdowns and a costly pick-six in the first half, but his playmaking in the second half propelled Oregon to the lead.

The Ducks improve to 3-1 overall and 1-0 in conference ahead of a home game vs Stanford next week.