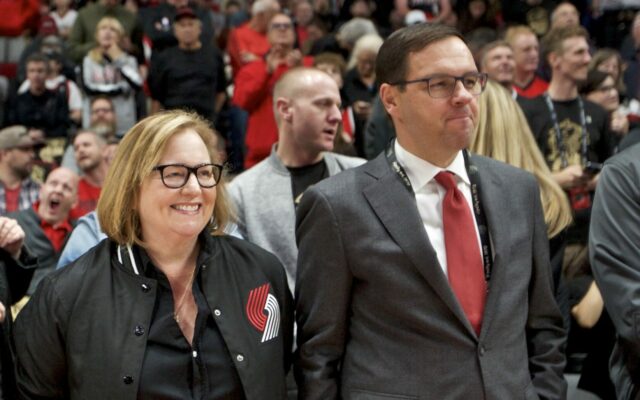 After nearly a decade in the role, Chris McGowan is resigning as President of the Portland Trail Blazers. There was speculation of change Thursday night and the official announcement came Friday, November 12th.

Yahoo Sports’ Chris Haynes initially reported the news at 10:03 AM:

Soon after, the Portland Trail Blazers put out a press release detailing the situation:

Under Hankins’ leadership with the team, the Trail Blazers achieved franchise records in ticket sales and corporate sponsorships, specifically in digital media revenue. He also played a key role in signing the first cryptocurrency company, StormX, to an NBA jersey patch deal in 2021, as well as in the negotiation of the broadcast deal with ROOT SPORTS, which brings Trail Blazers games to more fans than ever before across Oregon, Washington and Alaska.

Before joining the Trail Blazers organization from Anschutz Entertainment Group (AEG), Hankins oversaw the digital efforts of AEG’s sports properties worldwide, including the LA Kings and LA Galaxy, most notably the Kings’ cutting-edge social media initiatives from 2010-13. Prior to joining AEG, he spent time with the Minnesota Wild and began his career with the Miami Marlins as a public relations intern.

“Since joining the Trail Blazers in 2013, Dewayne has been crucial to our success and growth,” said Jody Allen, chair of the Trail Blazers. “Now in his ninth season with us, we’re thrilled to have him lead the organization.”

“It was a pleasure to work with Chris, and I want to thank him for the last decade of mentorship,” Hankins said. “I also want to thank Jody and Bert for their continued trust in me as I take on this new role.”

Since McGowan joined the organization in 2012, the Trail Blazers and Rose Quarter have seen dramatic growth in all key revenue areas including ticket sales, sponsorship, retail, arena operations and food and beverage. He also served on numerous nonprofit Boards of Directors during his time with the Trail Blazers including the Trail Blazers Foundation, Doernbecher Children’s Hospital Foundation, Boys & Girls Clubs of Portland, and was a founding member of the steering committee for the Portland Chapter of Positive Coaching Alliance.

“We are grateful for Chris’s contributions since joining the Trail Blazers nearly a decade ago,” said Jody Allen, chair of the Trail Blazers. “I appreciate his dedication to the organization and to our fans, and we wish him well in his next chapter.”

“I want to thank Paul Allen, Jody Allen and Bert Kolde for giving me the opportunity to lead this great organization over the past nine years,” McGowan said. “In addition, I want to thank our amazing staff for their tireless dedication to creating extraordinary moments at Moda Center and in the community and thank our players who represent everything that is good about Portland.”