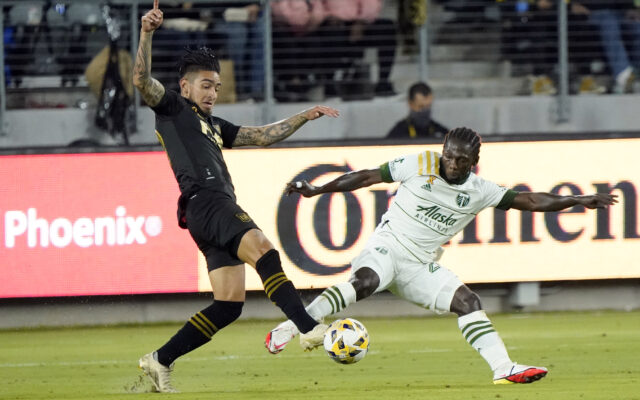 The Timbers opponent has been set for the Round of 32 in the 2022 Lamar Hunt U.S. Open Cup.

Portland will visit MLS rival Los Angeles FC on Tues., May 10th at Banc of California Stadium.  Kickoff is at 7:30 p.m. and all Round of 32 U.S. Open Cup games are broadcast on ESPN+.

From the Timbers Press Release:

PORTLAND, Ore. – The Portland Timbers will travel to face Los Angeles FC in the Round of 32 in the 2022 Lamar Hunt U.S. Open Cup at Banc of California Stadium on Tuesday, May 10, at 7:30 p.m. (Pacific), it was determined today as U.S. Soccer announced the Round of 32 matchups. All 16 Round of 32 games will be broadcast on ESPN+.

The Round of 32 marks the tournament entrance for eight U.S.-based Major League Soccer (Division I) teams. They join the 24 winners from the competition’s third round that was contested April 19-21. Teams were pooled geographically into groups of four, with the Division I clubs first entering the competition placed in different groups. A random draw determined the pairings within each group. Instances where a logical geographic fit didn’t exist in determining the groups were resolved by random selection.

In its 107th edition, the Lamar Hunt U.S. Open Cup – U.S. Soccer’s National Championship – has crowned a champion annually since 1914 – with the exception of 2020 & 21 due to COVID-19. The history-filled tournament is conducted on a single-game, knockout basis and open to all professional and amateur teams affiliated with U.S. Soccer. The Lamar Hunt U.S. Open Cup is the oldest ongoing national soccer competition in the United States and the world’s third-longest continuously-run national cup tournament.

The 2022 U.S. Open Cup winner will earn $300,000 in prize money, a berth in the 2023 Concacaf Champions League and have its name engraved on the Dewar Challenge Trophy – one of the oldest nationally-contested trophies in American team sports – now on permanent display at the National Soccer Hall of Fame in Frisco, Texas. The runner-up will earn $100,000, while the team that advances the farthest from each lower division will take home a $25,000 cash prize.