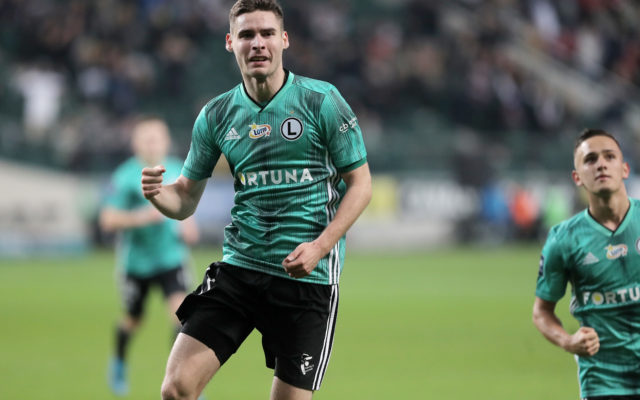 The Portland Timbers filled their third, and final, Designated Player slot with Polish Forward Jaroslaw Niezgoda, pending receipt of his ITC and P-1 Visa, according to the team’s official release.

Niezgoda comes to Portland via transfer from Polish Ekstraklasa side Legia Warsaw. He spent the last three years with Legia Warsaw, starting 40 of his 60 appearances across all competitions. Niezgoda scored 29 goals and gathered six assists between 2017-2019 with Legia Warsaw.

Press Release from the Portland Timbers below:

PORTLAND, Ore. – The Portland Timbers have acquired forward Jaroslaw Niezgoda as a Designated Player via transfer from Polish Ekstraklasa side Legia Warsaw, pending receipt of his ITC and P-1 Visa it was announced today.

“Jarek is an important addition to the club and we believe he has all the attributes to be successful in MLS,” said Gavin Wilkinson, general manager and president of soccer for the Timbers. “He has natural goal-scoring predatory instincts and the ability to score in many different ways. We look forward to getting him on the field.”

Niezgoda, 24, joins the Timbers having spent the last three seasons with Legia Warsaw (2017-2019), where he tallied 29 goals and six assists in 62 appearances (40 starts) across all competitions. In 18 appearances (13 starts) during the 2019-20 Ekstraklasa campaign, the 6-2 forward led the league in goals scored (14), while adding two assists. During the 2017-18 season, Niezgoda registered 13 goals and two assists in 27 appearances (22 starts), helping Legia Warsaw claim the Polish Championship. Notably, Niezgoda scored in the Polish Cup final – a 2-1 win for Legia Warsaw over Arka Gdynia on May 2, 2018.

“We are pleased to add another quality attacker to the club. Jarek is a clever and dynamic forward who has shown to be a finisher,” said Giovanni Savarese, head coach of the Timbers. “Not only are we getting a great player, but we are getting someone who will be a great fit for our locker room culture.“

The Poniatowa, Poland, native began the 2016-17 campaign with Legia Warsaw, but was then sent on loan to fellow Ekstraklasa side Ruch Chorzow, where he made 28 appearances (23 starts), recording 10 goals and four assists across all competitions. Niezgoda began his career with Polish third division side Wisla Pulawy, where he made 67 appearances (35 starts), tallying 24 goals and seven assists across all competitions.

At the international level, Niezgoda made five appearances and tallied one goal for the Polish U-21 Men’s National Team, including making three appearances for Poland in the 2017 UEFA European U-21 Championship.

Niezgoda will occupy an international spot on the Timbers roster.