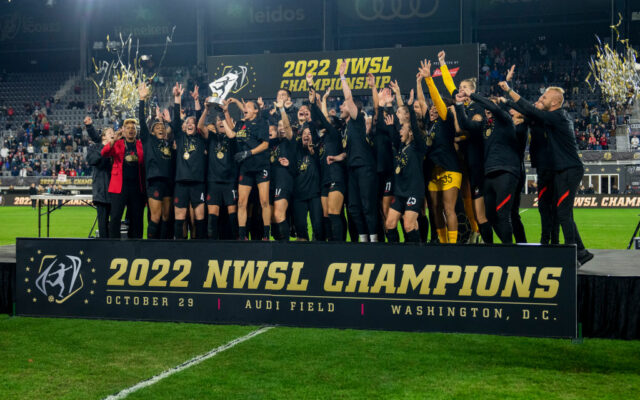 Portland Thorns FC made history on Saturday night by capturing the 2022 NWSL Championship with a 2-0 victory over the Kansas City Current at Audi Field, earning their league-best third title.

Sophia Smith opened the scoring for Portland in the fourth minute of the match to help Portland to tonight’s victory and secured the Championship match MVP award. The goal was her 15th in the season and first in the postseason. The 22-year-old forward become the youngest player to score a goal in an NWSL Championship. The goal was also the second quickest in an NWSL Championship. This week, Smith was named the 2022 NWSL Most Valuable Player and earned a spot in the 2022 NWSL Best XI. She became the second Thorns FC player to be named MVP after Lindsey Horan in 2018. Additionally, Smith became the first player in the league to win the NWSL MVP award and score in a NWSL Championship in the same season. Smith also earned the 2022 Championship MVP award tonight, becoming the first player to earn both league and championship MVP in the same season.

In celebration of the championship, the club invites fans to come celebrate with the team at a NWSL Championship rally on Tuesday, Nov. 1 at Providence Park beginning at 6 p.m. Stadium gates will open to fans at 5:30 p.m. The rally is free and open to the public, and fans will have the opportunity to purchase food and beverages as well as NWSL Championship merchandise and gear.