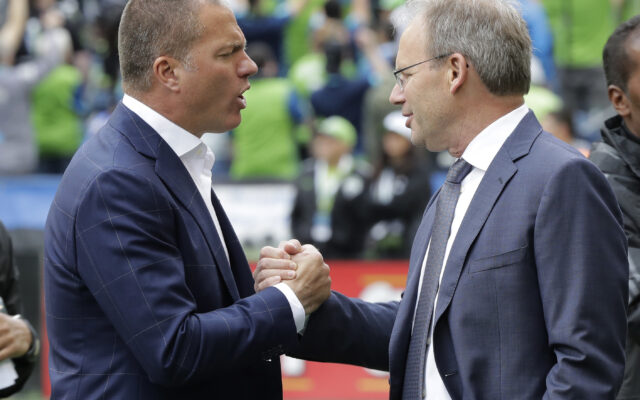 When Portland and Seattle collide it’s always noteworthy. Tonight was certainly not an exception in Seattle’s 6-2 win at Providence Park Sunday night. The match was more than simply dropping three points with Gio Savarese saying the game hurt and apologized to the fans postgame.

In the MLS history of this rivalry, six goals are the most either team has ever allowed in a fixture and the most Portland has given up in their MLS history.

Despite giving up their MLS-high in goals, Portland was respectable in the first half. Portland had more chances but Seattle keeper Stefan Cleveland stood tall and Fredy Montero got it done on the other end for the Sounders scoring a 29-minute brace to capture a 2-0 lead quickly. Portland continued playing well drawing one back from Sebastian Blanco who was inserted into the starting lineup for the first time since his injury.

George Fochive continued the positivity for Portland scoring off a rebound early in the second half to even up a then exciting affair.

The game was level at two apiece as late as the 52nd minute but the second half scoring storm by Seattle put the game well out of reach. About a minute after equalizing, Fochive fouled Nicolas Lodeiro just outside the box and Raul Ruidiaz stepped up and sent a bullet past Ivacic to take the lead. Ruidiaz wasn’t done, scoring again off tap-in after poor rebound control by Ivacic in the 72nd. Ruidiaz now has an impressive 10 goals in 10 games against Portland. Jimmy Medranda continued the avalanche, scoring a crossbar-down volley, and finally, Nicolas Benezet put the painful cherry on top scoring the sixth goal in stoppage time. The four goal difference marks the fifth time Portland has lost a game by three of more goals.

The Timbers have failed to perform against Seattle at home, losing 5 of their last 6 at Providence Park when hosting the foes from up north. After conceding three points to the second-placed team in the Western Conference, Portland now has the challenge of facing first-place Sporting KC at Children’s Mercy Park on Wednesday.