Pac-12 Opening Weekend: What to Expect, How to Watch, Game Picks, Odds 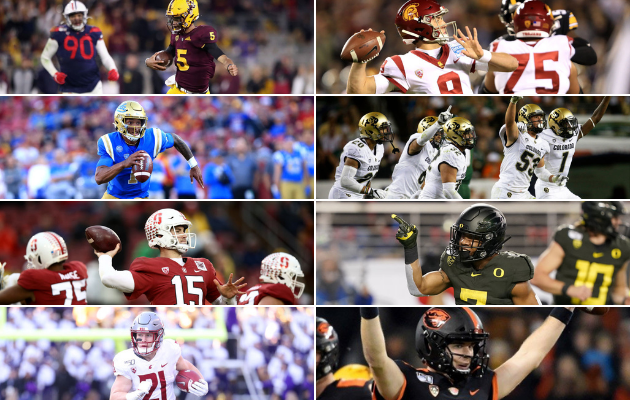 Disappointingly, we will have two fewer Pac-12 games than we expected for Saturday after COVID-19 continues to disrupt sports.

Let’s focus on the positives and the four games we will have this weekend.

(Odds based on Westgate Superbook via VegasInsider.com)

How to Watch — FOX

What to expect — Bill Connelly recently wrote on ESPN why it’s time to trust USC. I’m not there yet. I’ve called Notre Dame the Dallas Cowboys of college football because the Irish get a lot of attention, but don’t really have any recent championships to back up the hype. ND last won the national championship in 1988. USC isn’t quite that bad, because at least they won a Natty since the turn of the century.

USC should be good this year, but again they’ve only won the conference once (2017) since Pete Carroll left in 2010. Injuries have been a problem the last two years, I get it, but I’m still not ready to put lots of stock into USC. Clay Helton has been on the hot seat for years for a reason.

As for Arizona State, I don’t really know a lot about them. The problem I have is every time I’ve doubted Herm Edwards with ASU I’ve been proven wrong. I thought hiring Edwards was questionable at best, but he’s been fantastic for the Sun Devils. How is 7-6 and 8-5 fantastic, you ask? Well, considering the team was picked to finish last in 2018 and tied (with UCLA) for third in 2019. ASU finished second and third in ’18 and ’19 respectively.

What to expect — Chip Kelly and UCLA need to start moving in the winning direction or Kelly will be out of football again. In two seasons, UCLA is 3-9 and 4-8, so at least they improved last year. However, there is still much to be desired from this team. Luckily, Dorian Thompson-Robinson has had two seasons to learn. Unfortunately, he’s the only non-freshman QB on the team, so the Bruins hope he doesn’t get hurt. Last year’s leading rusher, Joshua Kelley, is still in LA, but with the Chargers not UCLA.

Colorado is always a curious situation. The Buffs have gone 5-7 the last three years, which includes the first year of Mel Tucker’s reign in Boulder. QB Steven Montez is gone. Swiss Army knife WR/RB Laviska Shenault Jr. is gone. It could be a struggle-filled 2020 for the Buffs.

How to Watch — ABC

What to expect — Stanford is the hardest team to bet against because it always feels like they’ll build a strong team… except last year. The Cardinal finished 4-8 when their QB situation went on a roller coaster ride similar to what 2020 has been for the world. Senior Davis Mills led the team in passing last year, and he returns to the helm now. Sophomore Austin Jones will try to get Stanford back to the “hard-nosed” style of play we’ve become accustomed to with the Cardinal.

The best team in the conference has a lot of question marks. Oregon is without a number of key players due to opt outs, for either COVID-19, preparing for the NFL or both. What I do expect is the Ducks to “play within the system” that Mario Cristobal has been building the last two seasons. Good offensive line play combined with smart quarterback play will keep the Ducks in College Football Playoff conversations in the 2020 shortened season. Oh and Oregon’s three leading rushers from last year are back. That will help whoever gets to start at QB going forward.

What to expect — Mike Leach and the Air Raid is gone. Nick Rolovich and the run-and-shoot offense is here. The Cougs are going with a true freshman quarterback for the first time ever in their season opener. Jayden de Laura went to St. Louis High School in Honolulu. The school should sound familiar to Ducks fans. Former Duck QBs Marcus Mariota and Jeremiah Masoli went there, and so did former Alabama National Champion Tua Tagovailoa. I’m not saying de Laura will be any of those guys, but as a Cougar grad (and fan) I’m excited for this kid’s future.

Jonathan Smith isn’t quite as far along as Cristobal at Oregon, but the Beavs are a team growing towards sustainable success. Unlike the Cougs, OSU’s starting QB has played in college before. Former transfer, redshirt junior Tristan Gebbia played sparingly in three games before his first Beav start in the Oregon-Oregon State game. In his lone start, Gebbia threw for 243 yards and ran for 25 yards; the Beavs lost 24-10. The bad news, leading rusher Artavis Pierce is in the NFL. The good news, Jermar Jefferson is back. Last year against Wazzu, Jefferson ran for 132 yards and two TDs while catching three passes for 52 yards and two touchdowns, but the Beavs lost that one 54-53.