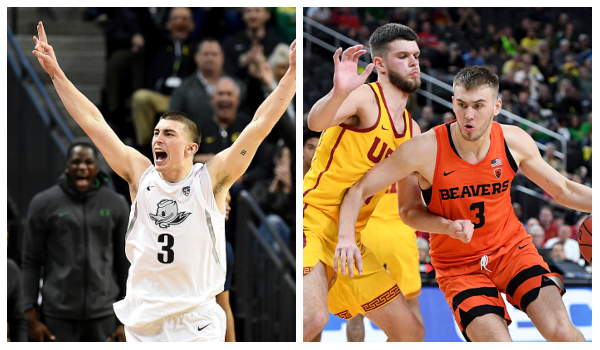 The 2020 Pac-12 Men’s basketball tournament will tip-off from Las Vegas, NV this Wednesday March 11th. Oregon, the defending tournament champions from last season (won as a 6-seed) and the regular season champions this season, have earned the No. 1 seed.

Action will begin at 12 p.m. when the No. 8 seed Oregon State Beavers take on the No. 9 seed Utah Utes. The top four seeds, Oregon, UCLA, Arizona State, and USC each have a first round bye and will begin their tournament action on Thursday March 12th.

The bracket for the 2020 #Pac12Hoops Tournament at @TMobileArena is set, with regular-season outright and defending tourney champion @OregonMBB earning the No. 1 seed!

The winner of the Oregon State vs Utah match-up will have a date with top seeded Oregon in the quarter-finals. So, we may see the third meeting of the season between the Ducks and the Beavers if Oregon State is able to take down the Utes.