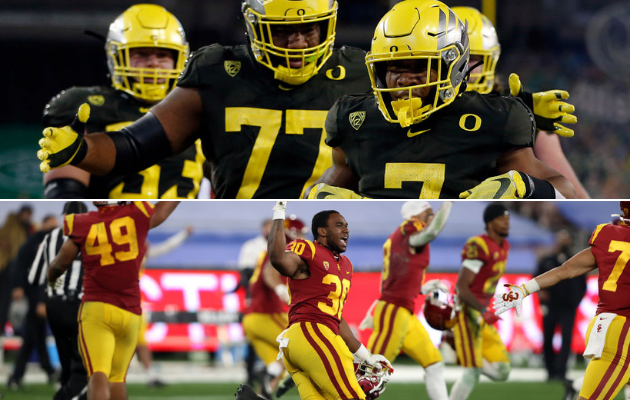 As we’ve seen for a few years, the Pac-12 Championship has no impact on the College Football Playoff. Obviously that means the national intrigue really isn’t there, but this game is still important.

If we’re being honest, is either team really that good? I don’t think so.

The Ducks (3-2) losses came in back-to-back games at Oregon State and at Cal. Two of their three wins came with some stress at home against UCLA, and the Ducks struggled early against Washington State before dismantling the Cougs.

In their other three wins, USC won in the turnover category twice and lost it once. They squeaked by Arizona State 28-27 despite losing the turnover battle 4-3.

Then, the Trojans edged Arizona (34-30) when they only got one turnover. For context Arizona State thumped Arizona 70-7, but the Trojans only won by four. I know ASU got seven turnovers against Arizona, but that makes me think USC should have gotten five or more.

Finally, USC won 3-2 in turnovers last week against UCLA, and they won by five.

The reason I harped on the turnovers for USC (and in some of the Oregon recaps) is because I don’t think the win without their high number of takeaways per game.

Truthfully, Oregon’s 3-2 record is what USC could easily be without all the help from turnovers, that’s all I’m saying.

Oregon’s defense is giving up 28 points per game while USC gives up 25 per game. However, the Trojans victories (as mentioned above) against Washington State and Utah skew that stat a bit.

Trojans QB Kedon Slovis is having a great season with 1,601 passing yards on 149-of-212 passing with 15 touchdowns and four interceptions.

Tyler Shough is doing well for the Ducks, even though it doesn’t always look great. The Oregon QB has 1,389 yards on 91-of-143 passing with 11 touchdowns and also four interceptions.

Other than the QBs, the players you’ll want to watch on either team’s offense is USC’s wide receivers and Oregon’s running backs. USC relies on its WRs more than its RBs, while Oregon is the opposite.

That’s not to say USC and Oregon don’t value their backs or receivers, respectively, I just mean it’s obvious which way the teams look to get their offenses going.

Meanwhile the Ducks backs are led by Travis Dye (336 yards) while CJ Verdell has been injured/limited in the last two games. Verdell despite the limitations still has 285 rushing yards.

For USC, Talanoa Hufanga is listed as a safety, but he can play everywhere. He leads the Trojans in tackles with 50 total (30 solo). He also has four interceptions and two forced fumbles.

Oregon’s guy, to me, is D-lineman Kayvon Thibodeaux. He’s third on the team in tackles (27, 16 solo) with two sacks and a pair of passes defensed.

How Each Team Wins

Honestly, I think the Trojans have to go away from their receiver driven offensive play. Again, their running backs are not slouches, but they aren’t as utilized as Oregon does use theirs.

We’ve seen Oregon give up a ton of yards on the ground, but the Ducks give up fewer yards than USC through the air. So, the Trojans needs to take advantage of the Oregon’s clearly-lacking run defense.

If the Ducks are going to “pull off the upset” they need the running backs to be as good as we know they can be.

Obviously, USC gives up 238 yards per game through the air, but if I’m being honest, I trust the running backs more than Shough.

Can Shough be the reason Oregon wins future games? Sure. I just struggle to see it for this game specifically.

If CJ Verdell is still limited, then it’s up to Travis Dye alone. If Verdell can go at a normal clip, then USC is in trouble.

However, I would be remiss if I didn’t mention Oregon has four players over 200 yards receiving (Devon Williams, Jaylon Redd, Dye and Johnny Johnson III).

Oregon can’t win the game JUST on their running game, but they need the backs to be above average to beat USC.

We’ll also have our Twitter account going throughout the game if you can’t watch it live (@750TheGame).