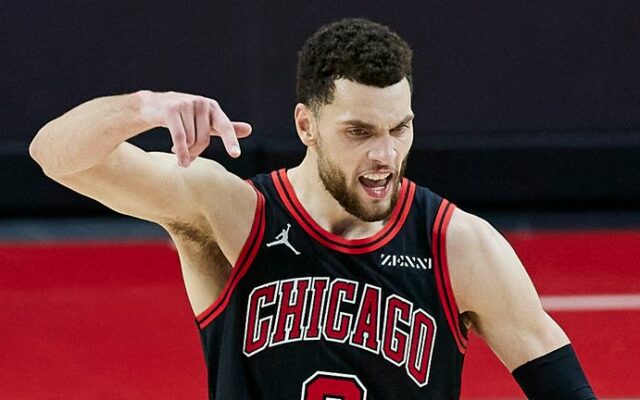 The Minnesota Timberwolves drafted Zach LaVine in 2014 with the 13th overall pick. What made LaVine stand out as a prospect was, and still is, his incredible leaping ability. He burst onto the scene during that same season with his outstanding Dunk Contest performance. Perhaps his most eye-opening dunk for me was a free throw line windmill dunk. Following that performance was his invitation to the 2016 Dunk Contest versus Orlando Magic rising star Aaron Gordon. This contest is considered the best one of all time. Aaron Gordon pulled off amazing feats of verticality, dunking around and over his team’s mascot, but somehow LaVine pulled off another win with a one-handed 360 dunk off self alley-oop.

While his athleticism continued to be a factor in games, LaVine developed a reliable three-point shot, all while upping his two-point field goal percentage almost every year. During the 2021-2022 season, LaVine averaged 24.4 points per game, 4.6 rebounds per game, and 4.5 assists per game on 47.6%from the field, 38.9% from three, and 85.3% from the free-throw line while appearing in his second All-Star Game. All of these stats were above his career averages, which is no surprise given that LaVine is in the prime of his career.

Among all qualified guards from last year, LaVine had the 3rd best true shooting percentage and 9th in effective field goal percentage. You would think with efficiency numbers like that, LaVine would be limited to points in the paint, but that’s not the case. On last year’s Chicago Bulls team, Demar Derozan patrolled the middle of the court, making it impossible for players on his own team to score in the paint. This was not an issue for LaVine, given that he shot 58.3% from the left corner three-point line as well as 63% from under the basket.

LaVine hits free agency after his four-year, $78 million contract expired. The Bulls do own Bird Rights on LaVine, meaning they can go over their cap to resign him. That contract put LaVine as the 34th most expensive guard in the league by average annual value (AAV). One note to keep in mind that may affect his value this offseason is that he just received arthroscopic knee surgery. He’s had injury issues in the past as well, as he’s torn his MCL in that same knee, along with other ankle and shoulder injuries.

The Blazers are one of five teams (Spurs, Pacers, Pistons, and Magic) that are projected to have cap space this offseason. The Blazers’ projected space is about $21.6 million per Spotrac. In order to afford LaVine without trading Damian Lillard, the Blazers would only be able to retain Anfernee Simons out of any of their potential cap holds for 2022-2023. The team would look something like Lillard, Simons, Lavine, Josh Hart, and a veteran minimum center, with Justice Winslow, Nasir Little, Greg Brown III, Keon Johnson, Didi Louzada, and Trendon Watford. While watching this team play would be loads of fun, it’s not close to a competitive team.

There were no instances where I could come up with a path for LaVine to sign with the Blazers unless he takes about a $15 million per year pay cut. There is a staggering amount of player option contracts that take up almost 25% of each team’s cap figures (John Wall, James Harden, Ben Simmons, Russell Westbrook, Kyrie Irving, and Bradley Beal account for $215 million in player options alone). Because of those top earners, there is not a great amount of money to go around to sign a player like Zach LaVine at the money he will command. The Bulls wouldn’t be able to sign and trade him because of the framework of NBA contracts until mid-December, so that option would be out.

If you wanted to get real cheeky, the Blazers could trade Lillard to the Bulls for Lonzo Ball and Nikola Vucevic, offloading Dame’s contract and replacing Nurkic with Vucevic. Just like most hypothetical trade machine combinations, it’s fun to create crazy trade opportunities that will never happen.

Are the Blazers Going to Land LaVine?

I cannot visualize the Blazers with LaVine on the team. Chicago will most likely offer LaVine the max contract or slightly below it. There aren’t many teams out there that could afford this contract other than the Bulls, given they have Bird Rights on LaVine. While it would be fun to watch the high-flying action that LaVine brings to the court, LaVine is not a viable option for the Blazers during this offseason.