OSN: Why The Seattle Mariners Need To Enter The Juan Soto Sweepstakes 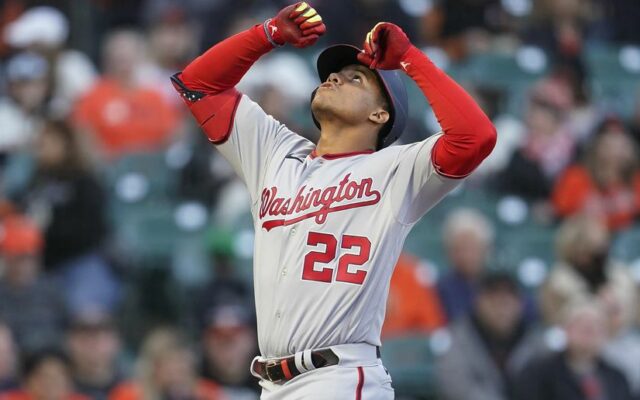 The Seattle Mariners have somehow managed to keep their sinking ship afloat, at least for a while. After seemingly plummeting out of the playoff race with a brutal stretch in May, the Mariners have won three straight series to pull within three games of a wild card spot. Mind you, some of that success is because the Los Angeles Angels decided they just were not going to win games anymore, but in any event, the Mariners are at least sniffing around the fringes of competition.

The Mariners’ recent success is due in no small part to phenom Julio Rodriguez turning into the heir apparent to Ken Griffey Jr. as a joy to watch superstar Ty France doing his best Edgar Martinez impression and the bullpen remembering it’s their job to close out games instead of turning them into a dumpster fire.

If that formula continues to work, the Mariners could find themselves in a position where, if a few breaks go their way, they could be at the edges of the playoff race come September. But to do so, they will need reinforcements. Outside of Rodriguez, the team’s outfield is in shambles. The offseason plan that the outfield was so crowded with talent that it would be impossible to find playing time for everyone is long gone. Mitch Haniger? Hurt. Jarred Kelenic? Bad, demoted, hurt. Kyle Lewis? Hurt, apparently cursed by evil voodoo magic, and then hurt again. Jesse Winker? Bad.

At points this season, the Mariners have resorted to starting utility infielders Sam Haggerty and Dylan Moore in the outfield simultaneously. The scary thing is they have been an improvement on some of the other options.

The Mariners have the No.2 ranked farm system in baseball, so surely there must be some reinforcements there? Here’s a dirty little secret – most of the farm system’s help in the near term is already in Seattle. That means the Mariners will need to leverage some of their prospects to get help from somewhere else, and if they need to do that, they might as well dream big.

Last week a rumor popped up that the Washington Nationals could consider trading superstar outfielder Juan Soto. Just 23, he has established himself as one of the top players in the game. After debuting at age 19, Soto will hit free agency in 2024, barring a contract extension – considering his production and age, potentially north of $500 million.

Baseball-Reference keeps comparison scores for every player in Major League Baseball history. Here are the similarity comps for Soto through age 22 seasons:

That is some insane company to be keeping.

Soto is the type of player the Mariners simply don’t trade for; he more fits the mold of the kind they usually trade away. However, if the team wants to be taken seriously as a contender, they must at least be in the conversation. The Nationals have said they don’t plan to trade Soto, but every team says that about their star player. They didn’t trade Bryce Harper either and wound up getting nothing for him. Additionally, they already offered Soto a contract extension, and he turned them down. Unless the Nationals turn things around significantly on the field, they may not have much choice.

To get Soto, the Mariners would need to do two things they don’t have a great history with: Pony up for a giant contract to keep him around long-term and part with several top prospects.

A potential package for Soto would probably have to include George Kirby, the team’s top pitching prospect (No. 2 in the organization) who was recently promoted to the Mariners, Emerson Hancock, the team’s No. 5 prospect and a starting pitcher who could make the big leagues next season, Noelvi Marte, the team’s No.1 prospect, a shortstop currently at High-A Everett and Harry Ford, the team’s top draft pick last season and No. 3 overall prospect.

I can already feel Mariners fans wincing about giving up so much. Time for another dirty little secret – That package is enough to get you in the door maybe and start talks – it would probably take still more. Maybe add in No. 4 prospect Matt Brash, who made his debut earlier this season, and perhaps a player like Kelenic who still has some top prospect shine on him, add in one or two other top-20 prospects,  and then you have a package that could possibly compete with the Los Angeles Dodgers. Possibly. Cleaning out most of the top-10 in the farm system gets you into “you’re saying there’s a chance” territory on a player like Soto.

But if they could pull it off, it wouldn’t help just this season. The Mariners could have one of the top outfields in baseball for a decade to come with Soto and Rodriguez patrolling it. It would show the league that the Mariners were serious about competing and give fans a reason to go to the ballpark. When you have a playoff drought old enough to drink legally, it’s time to push all your chips to the middle and dream big.