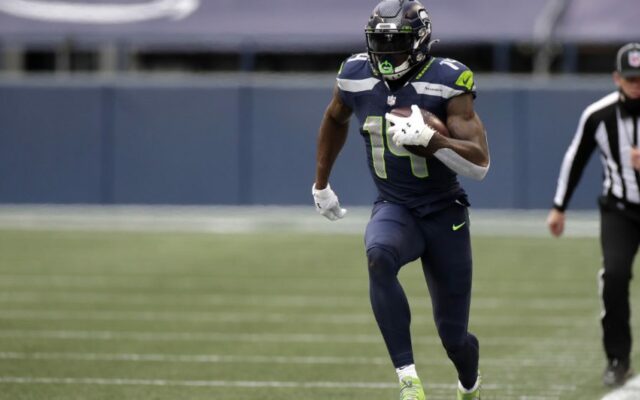 Have you seen a recent trend in the National Football League? If you guessed the emergence of the wide receiver as the second most important position, you are right on the money.

This offseason featured a ton of wild movement at the position. We saw the Dolphins trade for Tyreek Hill, the Raiders get Davante Adams, and the Eagles flip for A.J. Brown. On top of those trades came some incredibly massive contracts.

Hill is making $30 million a year, Adams is making $28.25, and Brown is making $25. Some wide receivers who weren’t involved in trades still made a lot of noise, which wasn’t good for their teams.

Among them were two from the NFC West and one from the Seahawks. As Russell Wilson left town via trade, it seemed like Seattle might have been interested in trading away D.K. Metcalf. Instead, they kept put and made it clear they wanted him in a Hawks uniform. But it took some pressure from the star wide receiver to make something happen.

Ultimately, he was awarded a three-year, $72 million deal with $58 million guaranteed and a $30 million signing bonus. His new deal will pay him $24 million annually and makes him the eighth-highest paid receiver in the National Football League.

Some fans may be a little bittersweet about this, considering he could’ve netted a ton of draft picks and maybe even an NFL-ready player. On the other hand, he is a fan favorite and a guy who has produced consistently since the team drafted him.

Here is my take on it: it’s a total home run hire for the Seattle Seahawks. Look at what other teams did this offseason to get a guy like D.K. Metcalf.

That is a ton of capital for a guy the Hawks already had in the building. Instead of starting over at the position and hoping they can draft another guy who turns into a player like Metcalf, they wisely paid him and can now begin to build their offense around him.

He has earned Pro-Bowl and second-team All-Pro honors and broke Steve Largent’s single-season receiving record in 2020. In three years, he has more receiving yards than any other player in team history.

Maybe on top of all those stats and accolades, Metcalf loves Seattle. He wants to play here and wants to be the face of the franchise, and that is something that fans need to get behind. This has been an offseason where they lost Russell Wilson and Bobby Wagner. This franchise is nowhere near the team that won a Super Bowl nearly ten years ago, and fans are ready to get behind another big star.

“I was going to be here, as much as I bluffed to (GM) John (Schneider),” Metcalf said with a chuckle. “I wasn’t leaving, just to let you all know. I wanted to be here. I wanted to play here, and I’m glad we got something done.”

It doesn’t look like Metcalf is bluffing about that statement, either. When he spoke at his extension press conference, it was clear that he loves this place and is thankful that he is a Seattle Seahawk.

“Just coming from Oxford, Mississippi, all the way over here to Seattle is a long journey,” Metcalf said while flanked by Seahawks coach Pete Carroll and general manager John Schneider. “I’m about to get emotional, so bear with me. It hasn’t hit me until now that I’ll have the opportunity just to help so many people back home and help my family. And just thinking about when I broke my neck and I was told I wasn’t going to be able to play football again, and now just this moment happening, it’s just all a blessing.

The wide receiver is a massively important position in this day in age in the National Football League, and the Hawks have their guy. What happens in three years when they finally have a quarterback who can lead them back to the playoffs, but that QB doesn’t have a star to throw to? This Metcalf extension made everyone happy and was the right call.