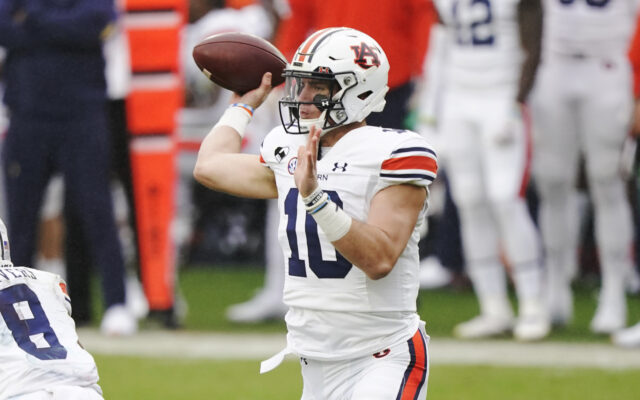 The Oregon Ducks will have a big decision to make come the end of July…or maybe in just a few weeks. As spring practice rolls on, the Ducks are in the midst of a quarterback battle. Usually, a starter is announced by the end of a spring season, but there is no telling when rookie head coach Dan Lanning will announce his decision.

Last week, media members were let into an Oregon practice to watch plays. Ty Thompson, Bo Nix, and Jay Butterfield are the three candidates for the coveted job. Thompson and Butterfield are returners, while Nix transferred from Auburn after receiving plenty of praise and criticism over the years with the Tigers, even having Heisman hype.

When the media walked into the practice, it was reported that Thompson was getting first-team reps. It seems likely that he or Nix will be the two fighting for the starting job, with Butterfield as a third option. Nix just came out of the transfer portal, while Thompson has never spent time in it. There is a chance that Lanning was strategic with his media window, throwing Thompson so the QB could be given the first-team praise while it’s known that Nix is unlikely to hit the portal again.

In a time where college athletes can use the portal as free agency, the last thing the Ducks want is for Thompson to bolt for a new school if Nix is seen as the apparent starter. However, at other times in media availability, Nix has been taking first-team reps. What does that mean? Lanning wants to keep his guys guessing just as much as he wants to keep the media guessing.

Of course, why not consider Nix the starter? This is a guy who led an SEC team to a handful of decent seasons in a conference with much more formidable defenses and much sharper competition. At the same time, Thompson had a few promising drives in limited playing time in 2021.

Let’s take a deeper look at the three guys being considered.

Thompson will be a redshirt freshman entering the 2022 season and was a highly coveted recruit coming out of Arizona. He was rated the second overall dual-threat quarterback by Rivals. Former offensive coordinator Joe Moorhead loved what he saw out of Thompson when he committed, giving him high praise.

“He’s incredibly talented,” said Moorhead.”We had a pretty good idea of that throughout the recruitment process. All of the five stars were earned. He had a very impressive resume as a high school quarterback. He’s a particularly cool customer, and confidence is bred through talent and preparation, so there weren’t any wide eyes when he was told he was entering the game.”

As I mentioned before, he showed promise in his limited playing time. He’s thrown 15 passes, completing seven for 87 yards and two touchdowns. He has thrown an interception mixed in there. I think there is no doubt that Thompson has the highest floor, and he could be a star in the NCAA and the next great Oregon QB. The fact Lanning was able to keep him around is positive for the Ducks.

Dan Lanning saw plenty of Bo Nix over the last three seasons as the Bulldogs coordinator often faced Auburn. Nix was the starter for three seasons for the Tigers, always maintaining an impressive touchdown to interception ratio.

In his freshman year, he threw for 16 touchdowns to just six interceptions. He entered 2020 as a guy who many thought would lead the nation in Heisman voting. While he put together another solid season, it was nothing off the charts and nothing that had national pundits dying for more.

In 2021, Nix once again led a consistent season. He threw for 2,294 yards and 11 touchdowns to just three interceptions. His passing percentage was just over 61 percent, the best in his career. His season was cut short due to an ankle injury. Shortly after the season, he entered the portal and chose the Ducks as his next squad. His decision came after Mario Cristobal left for Miami and just days after Lanning took the job.

Butterfield will enter as a redshirt freshman out of Brentwood, California. He was tabbed the No. 91 overall recruit, No. 5 pro-style quarterback, and No. 12 player in the state of California by Rivals. Butterfield is the least accomplished and experienced of the bunch, and if there was one guy who I would imagine hitting the portal, it is him.

Butterfield has thrown just three passes in his Oregon career and has cashed in on two of them for 22 yards. He isn’t going to move around a lot in the pocket, but his accuracy and touch have been touted by those around the program. 247 raved about the QB out of high school:

“Has physical upside with a slender frame that can add weight. Can make all of the throws. Can easily throw downfield, but also chips away with shorter and intermediate throws. Father played in Pac-10 and NFL. High football IQ with incredible poise and pocket awareness. Is a pure pocket passer, who throws with timing and great anticipation. Extremely polished. Projects as multi-year Power 5 starter and as a late second-day pick/early third-day pick in the NFL draft.”

I think this battle will come down to either Nix or Thompson. There is a real risk that Butterfield hits the transfer portal, but the best two QBs are at the top there. I would personally prefer Thompson, who the Ducks cannot afford to lose to the portal given the remaining years of eligibility left. You have to manage your roster like you’re in the pros, and having Nix as a backup is a best-case scenario.