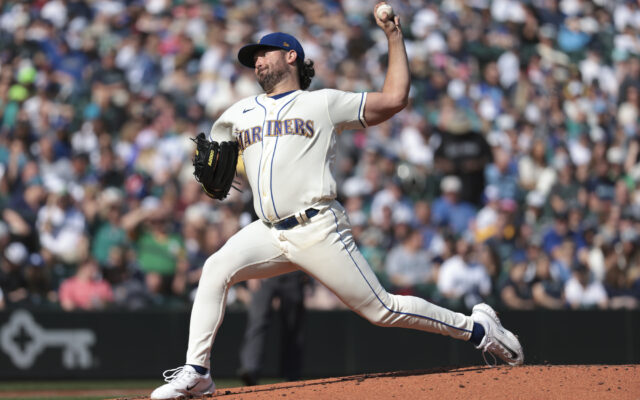 Going into the new Wild Card Series, the Seattle Mariners will have three games to clean up either the Rays or Blue Jays. As we know, the Mariners employed six starting pitchers this year but moved Chris Flexen to the bullpen once they acquired Luis Castillo. So you have to choose three guys to start in the series; Ray, Gonzales, Castillo, Gilbert, and Kirby. I will preface this with a rumor that it will be Castillo for Game One, Robbie Ray for Game Two, and a “to be determined” pitcher for Game Three (if necessary).

Let’s start with Robbie Ray. In signing him this past offseason, the Mariners were hoping to get the reigning Cy Young pitcher back. Unfortunately, Ray has turned into a middle-of-the-road starter. Ray has given up four or more runs in ten games this year. Why is this happening? Robbie feeds off of his fastball and slider combination. Last year, he had one of the best fastballs in the league, with a run value of -22. This year that has dipped to -6, which is still slightly above average. His slider has also seen a decent drop-off, going from -12 run value in 2021 to -6 run value this year. You can point to a lack of velocity as one of the reasons for the dip. On both the fastball and slider, he’s down about two miles per hour.

On to Marco Gonzales. His “stuff” is perhaps the most boring in the league. Gonzales’ pitches just don’t move all that well. Out of qualified pitchers, he ranks last in FIP at 5.15. This means he has benefited from the great defense behind him, catching balls that generally would not be caught. I’ve said in previous posts that Marco is due to implode. While I write this, Scott Servais noted that Marco would start the last game of the season and go as long as possible. This has multiple benefits for the Mariners, giving the bullpen rest and freezing him out of the Wild Card series. Perhaps I am too harsh on Marco, but as the cliché goes, numbers never lie.

I would start with Castillo, Gilbert, and then Kirby. Between these three pitchers, all feature league-leading fastballs. Luis Castillo has one of the best fastball averages for starting pitchers, hanging around an average velocity of 97 miles per hour. Logan Gilbert is an interesting case of deception. Statcast introduced a new metric this year called “extension.” This measures how far forward from the rubber a pitcher releases his pitch. Pitches are measured from the pitcher’s hand rather than behind the plate. These two factors tell a story about pitchers with fastballs that “rise,” meaning your brain thinks the ball will be lower than it is. Logan Gilbert has an average fastball velocity of 96 miles per hour but is also one of the top pitchers in extension. That 96mph fastball is coming into the batter’s vision faster than an average 96mph fastball. Because of this, he’s upped his fastball velo from last year and bettered his barrel percentage, which is pivotal in the playoffs. Lastly, George Kirby is who I would pitch in Game Three if it gets there. Kirby will not walk batters, ranking in the 96th percentile this year. He also features an above-average xwOBA, meaning his pitches create weak contact. This is the kind of pitcher you want in a critical game. This recipe is for a solid seven-inning start with minimal runners on base, which is when you would bring in the pair of Paul Sewald and Andrés Muñoz to close the game.

The Mariners have a great pitching staff to pull off the Wild Card series win. Between Castillo and youngsters Kirby and Gilbert, and the duo of Sewald and Muñoz, they can challenge the Yankees or Astros in a seven-game series.