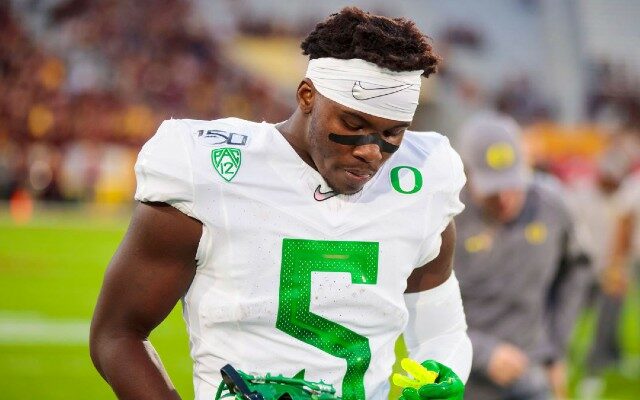 Sean Dollars will return to the Oregon backfield, but what else will be back for UO's RB room following the departures of CJ Verdell & Travis Dye? (AP Images)

Mario Cristobal is no longer at Oregon, and the reality is that many players might be heading out the door as well. Travis Dye is just the most recent Oregon Duck to hit the transfer portal.

Dye has transferred to USC, something that Oregon fans might have to get used to as Lincoln Riley is poised to become the top recruiter in the Pac 12. This move made sense for Dye, who grew up in Southern California and immediately joins a contender as it seems like Caleb Williams, the former Oklahoma QB, may be on his way to putting on a Trojans uniform as well.

Cristobal was a phenomenal recruiter. Oregon isn’t the easiest school to recruit, considering most coaches have to get on the plane and get their guys on the road. But there are obviously a million great perks to playing for the Ducks ranging from the status of the program, the facilities, and the ease of winning in the Pac 12.

Dye’s absence will sting the Ducks as he was the most consistent and talented weapon on offense in 2021. He rushed for 1,271 yards and 16 touchdowns in 2021 and led Oregon with 46 receptions. Dye could be a future draft pick in the NFL with numbers like that, and he realized he has an excellent chance for many eyeballs at USC, who will undoubtedly be on a ton of national screens in Lincoln Riley’s first season.

This isn’t the first or the last case of a Duck transferring before the 2022 season. There are currently 13 players that have hit the transfer portal for Oregon, and more could be on the way once they get to know their new head coach Dan Lanning and they’ll determine whether or not he is the guy they want to play for.

So where does that leave the Ducks at the running back position? While Dye’s departure will hurt, they have plenty of other guys who will be able to step in. Of the 13 players who are in the transfer portal, three other players are listed as running backs. Those players are Cross Patton, Trey Benson, and Sean Dollars. Out of those three players, the only one to officially leave Oregon is Benson, who has enrolled at FSU. Benson was a three-star recruit.

We know that CJ Verdell is heading to the 2022 NFL Draft, so he will not return to Oregon. That means that the Ducks have Bryon Cardwell and Seven McGee on the active roster. The Ducks should feel confident in Cardwell as a starter next year as he enters his sophomore season. During his first campaign, he rushed for 417 yards and three scores on just 61 carries. He exploded against Colorado for a 127 yard rushing day in what was his breakout performance.

The backfield should be Cardwell’s to lose during training camp as he is the only choice to take over for Verdell and Dye. Coming out of high school, he was a four-star recruit and the top-ranked running back to come out of the state of California according to ESPN, 247, and Rivals. Cardwell has the experience, which is an automatic plus, and it’s hard to imagine him leaving Oregon via the portal considering how late it is in the winter and the fact that he knows he will likely be in the top spot to start in 2022.

McGee could play the backup role for Oregon as he enters his sophomore season. McGee didn’t have many opportunities last season, but he was a four-star recruit coming out of high school and was the top player in the State of New York, according to ESPN and Rivals. He was just given a handful of carries for a total of 61 yards last year, but his production will certainly see a bump with two veterans off the roster.

Of course, there is another option for the Ducks: to recruit through the portal or try and flip a few prospects before the national signing day in February. We’ve already seen Lanning get big-name QB Bo Nix from Auburn, and we know what kind of recruiter he was at Georgia, so it wouldn’t be shocking if he was able to go out and get a few more talented players.

There are two massive targets for the Ducks. The first is an established running back from the Pac 12 in Colorado’s Jarek Broussard. The sophomore hit the portal after being injured to end his sophomore season for the Buffs. In his first year at Colorado, he was a freshman sensation, rushing for 895 yards and five scores. He had 661 rushing yards and two touchdowns in the 2021 season. He was the 2020 Pac-12 offensive player of the year, just the sixth Colorado player ever to be named to the honor. It would be a massive steal if Lanning can keep Broussard home in the Pac 12.

But maybe the biggest heist that Lanning could pull would be to attract his former Georgia commit, Jordan James, a four-star recruit who has supposedly taken a trip to Eugene to visit Lanning. He is the 16th best running back in the nation. He is considering Florida, Notre Dame, Oregon, and Georgia on National Signing Day, and Lanning will do whatever he needs to bring him to Eugene.