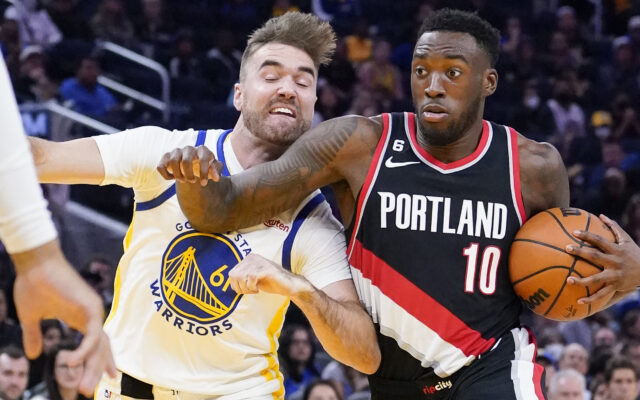 In 2019, Nassir Little was drafted as the 25th pick in the first round. Coming off the Blazers’ most recent trek to the Western Conference Finals, the hype around the team was the highest it had been in recent years. But like many Blazers’ tales, Little’s full ability was compromised with minor injuries that sidelined him while the team tried to make their way back to the top. But even on the sidelines, Little showed to be an incredible asset even when he is not on the floor. Despite a new coach and new teammates, Little has stepped up to be a mentor for the younger players, all while continuing to work on his game.

It was announced on Monday, October 17, that the Blazers and Little had come to an extension on the final day that extensions could be offered–not unsurprising, but after the team let Anfrenee Simons’s extension period come and go (to be signed later for a longer deal), it was a little surprising to see Little sign his extension. But the price was gobsmacking–$28 million for four years; a bargain basement deal in terms of NBA contracts in 2022. The potential Little has to be a valuable asset in the rotation could have been valued at double that cost–a continuing theme in Little’s career as he was projected in the top 10 for the draft in 2019 before dropping to 25, where the Blazers were able to snatch him up. Touted as the elusive 3-and-D player, Little has yet to play 50 games for the team, but the excitement around his potential has not waned. General manager Joe Cronin sang Little’s praises after the deal was finalized, saying, “Nassir is a talented player who has grown every year and has a very bright future.”

But it was Little’s own comments after the extension that assured the fanbase we would get to see our 2019 draft pick flourish into the player we know he can be. “I think my talent level is worth more than that. But with me having an injury history and them still taking a chance on me, I want to be here. I’ll probably perform at a level worth more than that, but being in Portland is what I want.” Blazers fans can behave a bit like scorned lovers at times, so statements like this resonate deeply with a fanbase that is used to losing their young talent for pennies in return (turning Gary Trent Jr. into Eric Bledsoe is still an open wound for some of us).

Head coach Chauncey Billups reflected on Little’s contract with his own experience signing his first major contract. Billups expressed that at the time, the longer deal was appealing to ensure financial security for himself and his family–not an uncommon feeling amongst today’s players. Despite becoming the Finals MVP and a potentially missed mark for a shorter deal with more money, Billups said he doesn’t regret the decision and understands Little’s position. “I wasn’t gambling with my family; I wasn’t gambling with my life. I wanted to get that security and then see what happens.”

With the addition of Jerami Grant this summer, Little does not have the pressure to resume at full speed immediately and could potentially become a valuable asset as a forward coming off the bench behind Grant. While listed as a guard, Josh Hart can play at the small forward position in a small ball lineup in addition to Little and Grant, which leaves plenty of flexibility while Little finds his momentum this season. Little’s attitude and commitment to Portland have left us hopeful even while he has not been playing–a new season and a new contract with a healthy Nassir should leave us more enthusiastic than ever about his potential.