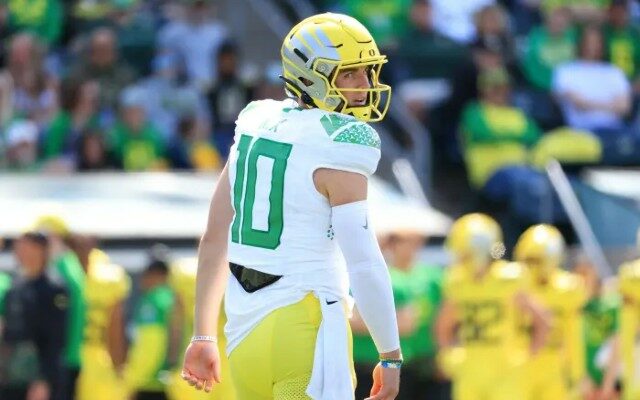 What a difference a couple of months can make, huh? Fast forward all the way back to Sept. 3, Opening Weekend of the college football season, and the mighty Oregon Ducks were being embarrassed on the national stage at the hands of Georgia, 49-3.

While the loss still looms quite significant in terms of the College Football Playoff, Oregon has turned their season from tragedy to triumph to the tune of six straight wins and a solid No. 8 ranking in the country following the Ducks’ convincing 45-30 win over previously undefeated No. 9 UCLA this past Saturday in Eugene.

Everything Oregon has done in nearly every fascist has improved since that UGA beatdown, but potentially no part of the Ducks’ turnaround has been more drastic than the quarterback play of Bo Nix. All preseason questions and fears were magnified after the Opening Weekend loss but since? He’s Nix’d them all. The biggest question surrounding Oregon’s star QB is whether he should receive an invite to New York City in December for the Heisman Trophy Ceremony. Well, guess what? He absolutely should.

Statistically, he has been nails. 17 TDs compared to just 3 INTs shows his maturity and sound decision-making. A 71% completion rating, along with a rating of nearly 166, suggests that he’s making smart decisions and providing big plays when available. But Nix is more than just a passer; at 6-2 and 213 pounds, he’s also proven willing and able to run at a high clip. His eight rushing TDs and over 50 rushing yards per game have been crucial in Oregon’s recent success.

During Oregon’s latest statement win over No. 9 UCLA, Nix looked more and more like another recent Duck QB that also sported the same number 10 jersey, Justin Herbert. His stat line also reminded Duck fans of the famed Herbert. 22-28, 283 yards, and 5 TD’s through the air. Eight carries for 51 yards on the ground. Now, if that performance against a top-10 team isn’t worthy of Heisman consideration, what is? The fact is, Nix is one of if not the most significant reason the Ducks have turned from a laughingstock in Week 1 to a team with a legitimate shot of finishing the rest of the regular season on an 11-game winning streak or at least a trip to the Pac-12 Championship Game.

Oregon is now the only Pac-12 team not to have a conference loss, 4-0 in conference play. The path is there for the Ducks to keep winning and setting up Nix for more marquee performances to come. The season’s final three games, vs. Washington, vs. Utah, and at Oregon State, will all provide not only Nix but the Ducks to finish strong and potentially get themselves back in the CFP conversation.

One thing is sure, this quarterback for Oregon is balling out, and the Ducks will continue to follow his lead through the end of the season, where his path will end up in NYC for the Heisman ceremony.