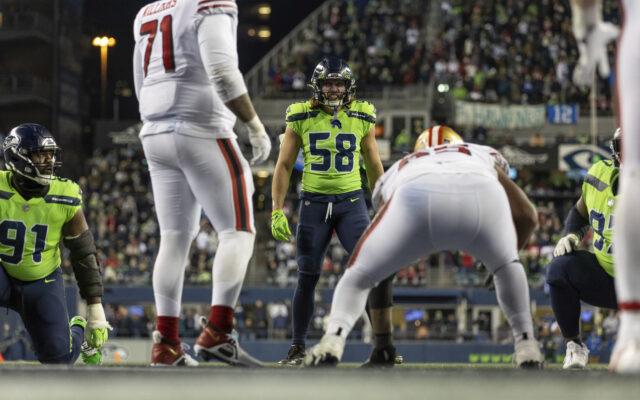 The last time Seattle faced San Francisco in the playoffs, it was for the right to represent the NFC in the Super Bowl for the 2013 NFL season. The playoff game this Saturday won’t have quite the same buildup, but it’s still a very important game.

Seattle lost to San Francisco twice this season, and neither game was incredibly close. Seattle only lost three games by multiple scores in 2022, and two came against the 49ers. The Seahawks are trying to get back to the divisional round for the first time since 2019, and if they can make it back to the conference championship – it would be their first appearance since the 2014 season.

Seattle made many changes this season, most notably at QB, as they gave the starting job to Geno Smith, who had just 34 starts in 8 seasons before taking over the offense this year. Geno’s numbers this year were nothing short of miraculous, considering he wasn’t even a given for the starting role going into the season. Geno’s 4,282 yards and 69.8% completion percentage are team records, breaking Rusell Wilson’s marks of 4,219 and 68.8% in 2019. Geno’s 30 touchdowns put him in great company with Wilson and Dave Krieg as the only QBs in Seattle history to record at least 30 passing touchdowns in a season. Geno had only started an entire season once before in his career, his rookie season with the Jets in 2013. This year, Geno finally got his second season as a full-time starter – and he didn’t waste time making the most of it, getting the first winning season of his career and his first playoff berth.

Despite Geno’s stellar season, the offense has just looked off lately, and that’s not a great sign, given the defense they will be facing this Saturday. The one bit of good news is that San Francisco looked pretty vulnerable against the Raiders two weeks ago, but they looked like a buzzsaw again this past week against Arizona and their 4th string QB. Geno is head and shoulders better than the Cardinals’ 4th best option, but he doesn’t have a great history against elite pass rushers, and that’s what he’ll be facing this week.

San Francisco’s pass rush is close to resembling its 2019 level, and that is terrible news for the rest of the league. Most veteran tackles struggle to slow the 49ers’ pass rush, especially Nick Bosa, but Seattle is starting rookies Charles Cross and Abraham Lucas. Their rookie tandem has performed well overall, protecting Geno and opening running lanes, but had issues against Bosa and company in both meetings this season. Geno was sacked twice in the first meeting and three times in the second meeting, and despite the constant pressure, Geno completed at least 70% of his passes both times. Imagine what he could do with time to find the open receiver downfield.

On the flip side, Seattle is facing rookie QB Brock Purdy for the second time after facing a combination of Trey Lance and Jimmy Garoppolo in the first meeting. Purdy has played nearly perfectly in his short stint as the starter and hasn’t given defensive coordinators much to work with. He stays calm, stays patient, and takes what the defense gives him, but he isn’t shy about uncorking the deep ball when the situation calls for it. He might be the best fit for Kyle Shannahan’s offense since Jimmy G, and he comes very cheap. Despite spending three first-round picks on Lance and a mountain of cash on Jimmy G, Purdy might be the answer they needed, and he was taken in the 7th round.

The 49ers don’t just have a veteran and talented group on defense; they are equally experienced and talented on offense. They know how to rush the passer and stop the run, but they are just as good at running the ball and opening up easy completions downfield. They play sound, savvy football on both sides of the coin, making them a tough draw any day of the week.

Seattle, for all of their positives this season, are just not that way. They can be sloppy on offense, and they tend to give up way too many big plays on defense. They have their moments where you think they have it all figured out, but too many times, you see them stumble on the very next drive, whether they have the ball or not.

San Francisco is a model of consistency regardless of who they have available week to week. Seattle is not exactly the opposite, but no one is confusing them with a consistent team. And yet, they have everything they need to go into the bay area this week and deliver an upset against their hated division rival in their own house.

Seattle has QB Geno Smith, who was top 5 in completion percentage and touchdowns, top 10 in passing yards and passer rating, and top 12 in plays over 20 yards. The 49ers might have a great pass rush, but they are facing a top-10 QB this week, and you just can’t say that about their last few opponents.

RB Kenneth Walker III put up over 1000 rushing yards this season as a rookie, and he did that without starting the first month of the season. Seattle has been looking for an heir to Marshawn Lynch, and they appear to have found it in Walker.

Receivers Tyler Lockett and DK Metcalf can give defenses nightmares with their ability to stretch the field and make tough catches in traffic. If the coaching staff can scheme ways to get these guys open and give Geno time to throw the ball, they could go to the air and make the 49ers pay for their one weakness which is their secondary. The easiest way to do this is to get them involved early with easy throws, then start to move the ball to role players, and then when the defense stops focusing on your stars, you shove them down their throats and make them prove they can stop it. You need to keep the 49ers guessing with a mix of run and pass out of heavy formations, using an extra lineman to open running lanes and protect Geno when he drops back. Seattle did this with Russel Wilson early in his career and should go back to it against an opponent that likes to get after the QB.

Mix in screens and jet sweeps to confuse the pass rush, don’t just rely on play action. A good mix of short throws, screens, reverses, and play action will keep the defense guessing and force them to decide how often they want to get in the backfield when they should be defending the flats and first level. 49ers LB Fred Warner is great at playing QB spy, so you can’t just have a rotation of these plays; you need to do things randomly. And don’t huddle up more than you need to; the players on this team either know the offense or they don’t, make sure you’re not huddling for huddling’s sake, and give the defense time to rest. If they want to chase your QB on every down? Fine, let them. Make sure you convert and get a new set of downs to keep them tired.

Finish drives with points; this 49ers team doesn’t score in bunches, so don’t worry about how many points you’re getting each drive. Just make sure you get more than your opponent. If you get into your opponent’s territory and come away with zero points, it’s almost the same as giving them 3 points because you should be getting that minimum.

Stay aggressive, stay smart, and let them tire themselves out. This San Francisco team is not the 1985 Chicago Bears. To be honest, they aren’t even the 2019 49ers. They have weaknesses; they need to be exposed. Seattle has a potent offense; they need to make sure they apply pressure with points and possession and then give up as few big plays as they can. Geno and Purdy are alike in that this is their first playoff game, so we don’t know how they will react. But Geno has many years in this league and has played more games than Purdy, so he should have the upper hand even if Purdy has the better offensive line.

Seattle can win this game, and I believe they will. Sure they lost twice in the regular season, but that doesn’t matter anymore. All that matters is this game. Sure, if they played ten times, the 49ers might win nine, but that still leaves one time. And this is their time.