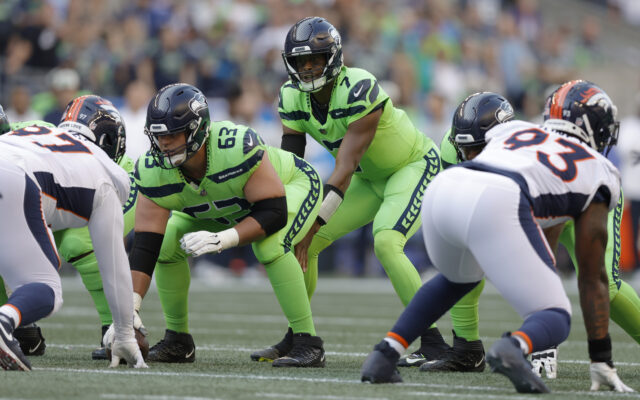 A week ago, Seattle was the only team in the NFC West to get a victory, and this week they were the only team in the division to record a loss. That puts them in last place just a week after they had a promising lead. Just a half-game out of first place, they just need some help from their divisional rivals and a relatively easy schedule. The latter of those two items arrives this week as they host the Atlanta Falcons – the winless Falcons, for that matter.

Seattle is currently favored at home by less than a field goal, and the over-under is set at 41.5. So Vegas doesn’t see either team being capable of a high-scoring affair since they believe the game is going to be close and have the overall score set at seven touchdowns – total. The oddsmakers don’t see Seattle as a team that can score 24, and they don’t see Atlanta as a team that can score 21; that’s what the numbers tell you. And as much as it stings to admit it, they are probably right or very close to it.

What Vegas knows, and what many of you can probably guess without looking at the details, is that this game is going to be played by two teams struggling to score when it matters, and neither team has put up a lot of points yet.

Atlanta was down 28-10 entering the 4th quarter last week before putting together a furious comeback attempt that nearly paid off. The week prior, they had a 23-10 lead heading into the 4th quarter before giving their opponent a 17-3 advantage in the final frame and losing the game by one stinking point.

Seattle scored 17 points in week one, which was enough for the win – but they got all three scores before halftime. They held Denver to just a field goal in the final frame to close out the win, but that can be credited to Denver’s coaching meltdown as much as it can be credited to Seattle’s success. Seattle was down 20-0 at halftime last week and only scored once in the third quarter before being blanked in the 4th to lose by three scores.

Atlanta has allowed 29 points per game while scoring just under 27, and Seattle has given up just under 22 per game while scoring just 12. One of these teams will have to score more than the other team….right? Seattle’s defense looked solid on their own turf against Denver, and that same unit looked out of their element playing in Santa Clara last weekend. Will we see the confident and consistent unit we saw at home in week one or the one that looked like they couldn’t wait for the game to end on the road in week two? They get to play at home this week, so hopefully, that is the best recipe for success, especially against an opponent that has not figured themselves out yet.

Seattle has had trouble protecting their QB and has had trouble getting after the opposing QB, which is not a good sign. They have just three sacks by three separate players so far this year, and you may recall that getting pressure on the QB was an issue each of the last two years. Atlanta already has five sacks, and five separate players have at least partial credit on a QB takedown.

Without getting too deep into the weeds – let’s call it like it is. Seattle looked good (not great) in week one, and they looked terrible in week two. What’s strange is that I could easily argue that Denver is the better team, and yet they were beaten badly by San Francisco, but that happens sometimes. If they can be even decent in week three, I think they can win.

Atlanta looked good in week one before blowing it. Then they looked terrible in week two before blowing their chance to come back once the Rams had the decision all but wrapped up. The Saints literally stole a win away from Atlanta in week one, but let’s not pretend the Saints are a quality opponent. So you have two teams that don’t know who they are and have struggled on both sides of the ball. It should make for an exciting contest Sunday afternoon.

Seattle QB Geno Smith looked poised and excited in week one, and he looked the opposite in week two. It was a lot like what we saw from Geno in week five last season when he took over for Russell Wilson, and then the version of Geno we saw in the coming weeks when teams were able to prepare for him. The element of surprise lasts about two quarters in the NFL, sometimes less, and Seattle had better have a better game plan this week that involves an actual plan and not just blind hope. They seemed to forget they needed to block for Geno last week, and while it’s not fair for most rookie tackles to have to block a guy like Nick Bosa, that was what they knew they were up against and still had issues protecting their QB. This week there won’t be anyone like Bosa across from them, so it should be a much better day for Geno. Charles Cross handled Bradley Chubb pretty well in week one, so I would say he has a good chance to protect Geno this week.

Former Oregon QB Marcus Mariota returns to the NW and runs the Atlanta offense for now while the team develops rookie Desmond Ridder. Atlanta and Seattle are in similar positions with an offense mainly constructed and a player or two they like at critical positions, but the QB spot is very much up in the air. They are both getting by in year one of a rebuild while they invest in a new look on defense and rely on a veteran mobile QB to get them through at least this season.

If Seattle can get their quick rhythm passing game going early again this week as they did against Denver, they can do their defense a lot of favors by letting them rest up. The offense needs to convert long drives into points, and when they aren’t getting points, they need to get at least a first down to make sure time comes off the clock. The home crowd may not be as fired up as they were in their home opener in front of a national audience and playing against their old QB, but they should still be plenty loud. Atlanta has had the comfort of playing the last two weeks indoors, and now they will have to play outdoors even if it is going to be perfect football weather (in the 70s, partly cloudy with 10 mph winds).

The pressure is on Atlanta to get their first win on the road, while Seattle just needs to prove week one wasn’t a fluke and score four times in a single game. Getting DK Metcalf heavily involved would be a good start, and then opening the floodgates with some big runs by Rashaad Penny and Kenneth Walker. If Geno has to wait for guys to get open, we know this offensive line isn’t built for extended plays. They need to get the ball out of his hands quickly, spread it around to many different receivers, and keep the run-pass ratio balanced, so the defense doesn’t know what’s coming. Then get the home run ball on a play-action pass and make them pay big time. This worked in week one; it can work again, just don’t let up; if the defense starts playing more aggressively, give your QB some cheap completions to make them spread out the defense. Too many coaches get conservative when they get a lead in the second half, but the best way to protect a lead is to add to it.

Seattle should win this one 28-24 and head into a week four matchup with Detroit and the chance to start October with a winning record. They only won seven games all of last season; if they can get their second win this week, they will only need six more to exceed that. It may not be what the fans wanted them to tank would prefer, but it makes for better football on Sundays.