OSN Column: Why Are The Portland Trail Blazers Struggling On The Road? 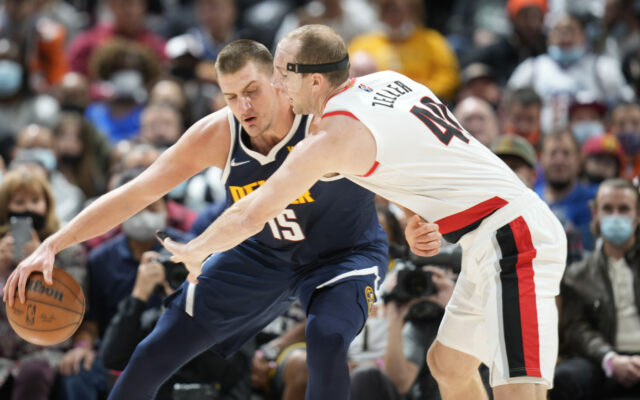 The Portland Trail Blazers have an intriguing record at 7-8 this year. They seem to love being at home, winning six in a row after dropping the first game to the Kings. They do get homesick, though, going 1-7 away from the Moda Center. We all hear about home-court advantage. This may be true, especially with the loyal and passionate fans that the Trail Blazers have, but let’s dive into some specifics. Check out the Blazers home and away splits: 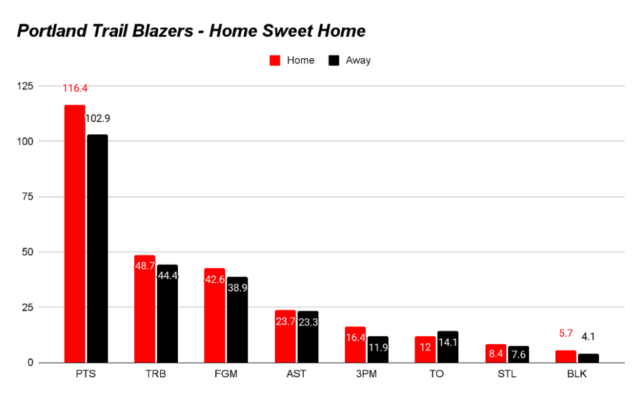 Right off, you can see that Dame and company love the Moda Center, being in the top five in scoring. Every other stat is better, with more field goals, fewer turnovers, and more active defense in steals and blocks. One glaring stat that sticks out is their three-point numbers. At home this year, the Blazers are making 16.4 three-pointers, which is the best in the league. Away from the Moda Center, they only make 11.9 three-pointers per game, sliding them to 15th. On the face of it, that’s not an incredible drop-off. However, the shooting percentages beg to differ. At home, the Blazers are shooting 39.4% from three, which is second in the league. Away, however, they are shooting 31.3%, which puts them in 25th. Keep this stat in mind for later. Let’s flip over to how opponents are faring against the Blazers in Portland and at their own home: 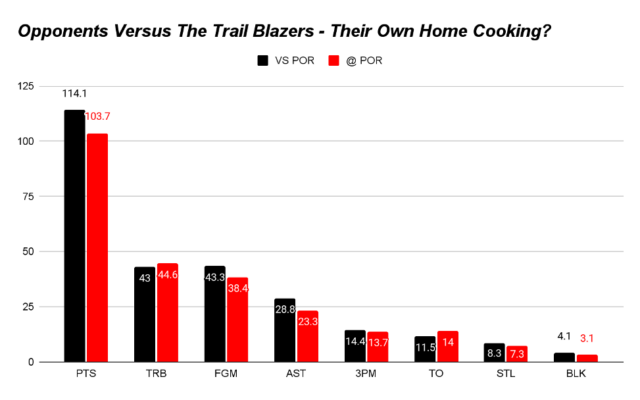 Just like we mentioned before, the Blazers struggle away from home. Portland gives up 49.9% shooting when they are the away team, which is the worst in the league. They are also allowing a 40.9% three-point percentage as well, which would be second worst. One other note is that 28.8 assists allowed are also the worst allowed by a team this year. Why is this happening? Factors like opponent strength and Blazers’ key performers may explain why.

How Tough Are Their Opponents This Year?

When looking at a team’s road versus home struggles, the first factor is how difficult the opponents were. At home, by net rating on average, the Blazers faced the 15th toughest schedule. Away from home, the Blazers faced off against the 11th toughest schedule. They’ve had the unfavorable draw of playing the Clippers three times already (8th best in net rating), going 1-2 against them. For away games, seven of those eight teams were in the top twelve, with their only win coming against the last-place Houston Rockets. Now, it’s easy to end this here, but let’s dig deeper into their key players, one of which may surprise you.

As mentioned in previous articles, NBA metrics show that this team thrives on Jusuf Nurkić’s success. Looking at on-off stats, the Blazers gain an overall of twelve to their overall team rating with Nurkić on the court. You can correlate that directly to their wins and losses as well. In wins (six out of seven at home), Nurkić posts 124 offensive and 86 defensive ratings. He’s also shooting 5% better, grabbing two more rebounds and adding two more points. In the losses (seven out of eight happening on the road), Nurkić is posting a 105 offensive rating with an uncharacteristic 118 defensive rating. For reference, against Denver on November 14th, in 21 minutes, Nurk posted a season-low four points and six rebounds going against a top-five defender in Nikola Jokić.

It’s strange to get this far not to mention the likes of CJ McCollum or Damian Lillard at this point as impact players. Don’t get me wrong, even though Dame has had a tough year so far, and McCollum has stayed his consistent 20 points per game scoring, they aren’t the second most impactful player. Believe it or not, Larry Nance Jr. has more offensive impact than Lillard and McCollum combined. Just like we looked at Nurkić on-off stats, we’ll focus there. As most seasoned NBA fans know, Larry Nance Jr. is known for his athletic dunks, not his defense. That is evident by his 111 defensive rating. What sticks out, though, is the success that the Blazers have offensively with Nance. His on-off accumulation adds 8.7 to the team’s offensive rating, the best on the team. Nance thrives in diving to the basket, following the aggressive guards that the Blazers have, or scoring off of second-chance points. That offensive rebounding percentage minus the opponent’s offensive rebound percentage jumps 10% while Nance is on the floor, from 19.4% to 30.2%. The biggest downside to this aggressive play is that Nance only averages 18.6 minutes per game.

Lillard-McCollum-Simons – Did Someone Order Threes?

I couldn’t get any further without mentioning Lillard and McCollum, but let’s also rope in rising star Anfernee Simons. These three are responsible for jacking up the most three-pointers on the team. As we’ve seen, the Blazers’ offensive success hinges on these three guards’ ability to make three-pointers. At home this year, the trio is responsible for a 39.9% three-point percentage, making an average of 22.3 between them each game. Away turns grim, shooting a combined 30.4%, only making an average of 17.3 per game. Using simple math, missing an average of five three-pointers per game loses 15 points per game. If you remember from earlier, the Blazers are averaging five fewer three-pointers made when they are the away team. Maybe the trio just isn’t feeling themselves missing those extra shots because it’s affecting their defense as well. In away games, they average around a 120 defensive rating, while they average a 108 defensive rating at home.

How can the Blazers turn it around?

First, I believe their success hinges on the three-point shot going in, which is not a mystery in today’s NBA. The current barrier to their success is the ability to make three-pointers from Lillard, McCollum, and Simons, coupled with their passable perimeter defense. It shows you how vital guard play is in today’s NBA. Second, the Blazers spark plug in Larry Nance Jr offensive impact is genuinely understated. With Norman Powell overshadowing this acquisition, Nance has become just as vital as Powell to their offensive success. Finally, the health and top-tier defensive play of Jusuf Nurkić is enough to keep this team together for now. They don’t need the Bosnian Beast to score; they need him to lock the defense down.