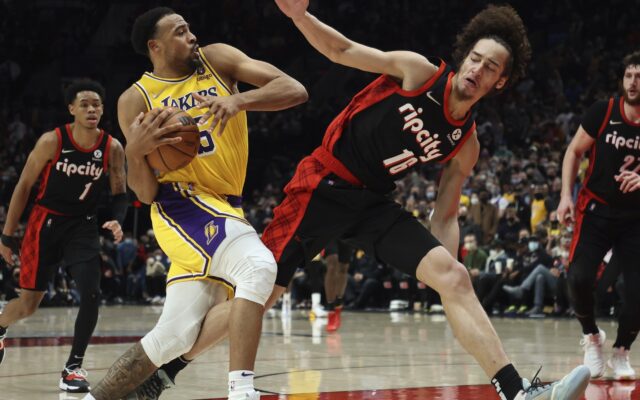 Going into the 2021-2022 NBA season, the Lakers were the second-highest favored team (+425) to win the title, only behind the Brooklyn Nets. Vegas had their preseason over/under wins total at 52.5. On the other hand, the Trail Blazers were in the bottom third of the league at +5000 to win the title, with their preseason over/under wins total at 44.5.

The Lakers touted a lineup with a career 21.58 Player Efficiency Rating (PER) average. Anthony Davis and LeBron James lead the team, each with 27 PER. The Blazers were less, at 17.34 PER for their lineup, led by Damien Lillard at 22 PER and CJ McCollum at 19 PER.

Fast forward to the end of the season, when both the Blazers and the Lakers missed the playoffs. The Lakers finished with a 33-49 record, and the Blazers finished with a 27-55 record. What led us to these results, and who had the more disappointing season? Let’s look at the transactions for the year to see how they both managed their upsetting records:

You can see the effort by the Lakers front office to piece together that winning team. Taking a shot on Isaiah Thomas, who showed he still had the tenacity to play in the league, was a low-risk, high-reward move. The fit on the team just did not bode well for another scoring guard. The Lakers sought out Darren Collison and Stanley Johnson with injuries, who were starter-level players in their careers. Collison only lasted three games, and Stanley made it to the end of the year while only putting up an average of six points and three rebounds. Halfway through Anthony Davis’ knee injury, and LeBron battling an abdomen injury, the Lakers traded away Rondo. They couldn’t make a splash around the trade deadline and practically hoped LeBron and Russell Westbrook would carry them to the playoffs. Unfortunately for Lakers fans, the team did not make it into the playoffs. Between LeBron James and Anthony Davis, they missed 69 games, while Westbrook missed only four games.

The Blazers missed out on the notable, in-season free-agent signings, but their ceiling was not as high as the Lakers. Looking back, you can see that the plan was to overperform with their current roster and use the assets of McCollum and Covington to try and snag something at the deadline. Given Lillard’s missed time with his abdomen injury and McCollum’s missing time with a scary lung issue, the Blazers’ front office used this time to gather assets at the deadline. Dumping the expiring salary of Covington was almost a given at the beginning of the year. Most Blazers fans also agreed that McCollum would be the odd man out if the record did go south as it did, but we were all shocked that they shipped out newly signed guard Norman Powell. They received one of the best rebounding guards in the league in Josh Hart, a great defensive forward in Justise Winslow, while dumping some salary from Powell and Covington.

Who had the more disappointing season?

The Lakers had the highest hopes among the two teams. Their front office tried to acquire pieces to compete with the other Western teams while Anthony Davis healed in Collinson, IT, and Stanley Johnson, but only Johnson stuck with the team until the end of the year. Both teams’ best players were hit with long-term injuries, but the Blazers used the opportunity at the trade deadline to bolster their squad for the future, whereas the Lakers weren’t able to capture anything. Between the two fan bases, you would admit that the Lakers were the most disappointed fan base, possibly in the entire league.