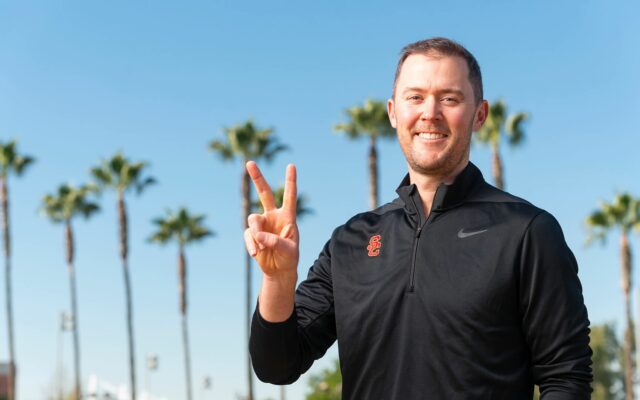 The top of the PAC-12 is going to look different this August. One thing is for sure, USC is back. The years of dormancy amidst the sleeping giant is over. Lincoln Riley rolled into town and immediately made some major splashes. I’m not here to say that Oregon is doomed, and their reign of success is over. I think that’s unfair to Dan Lanning and the promise that he brings the program, but the PAC-12 Championship Game, which will be key to the College Football Playoff may now go through the Trojans.

Lincoln Riley is the real deal. You can say what you will about his CFP record or how he left Oklahoma, but he was the leader of the Big 12 from the day he took over. Riley coached at Oklahoma for five seasons. In the first four, he took them to a New Year’s Six or CFP semi-final. In those first four years, Riley led the Sooners to a Big 12 Championship in every one of those seasons.

He will undoubtedly bring that success to the PAC-12, considered a weaker football division at the moment. There has been a lot of up and down and turmoil out of this conference in recent years, and no team in the PAC-12 South should make USC scared. Arizona State is the laughing stock of college athletics. Arizona had a nice recruiting season but still hasn’t proven themselves on the field in nearly ten years, Colorado is inconsistent, and UCLA has not reached the heights the program thought they would under Chip Kelly so far. Utah is maybe the one team that stands in the way, but they are a program with limited expectations and a much weaker recruiting base.

Oregon is still cruising in the PAC-12 North, especially with the issues Washington football has had in recent years. There is no question that Oregon has been the darling of the conference in recent years, but there could be a hangover with Mario Cristobal leaving, and recruiting is still a tough job in Eugene.

USC will benefit from Riley in many ways, and we already see that in some cases. For starters, he was able to bring over Caleb Williams, his former five-star recruit at quarterback. He took Travis Dye from Oregon, he brought in Mario Williams, a four-star wide receiver from Oklahoma, and Brenden Rice, Jerry Rice’s son, from Colorado.

Not only will established stars want to play for Riley, they know that the NIL possibility in Los Angeles is big. Caleb Williams may not be on billboards in Hollywood; they have enough stars. But it appears that USC is getting creative in the deals that are being worked out for their players. Williams just recently signed with a real estate private equity fund.

“‘We’re taking a bet with Caleb, and hopefully he crushes it, and a lot of good can come from that,’ Walker said. ‘But we legitimately want him to learn and to provide him opportunities. We bring a lot of real estate investments, but we can also be a sounding board for him. He can talk to us. We can give him objective advice. It’s really an investment in this kid.’”

Sure, the pizza shops in Eugene might be nice for players heading to Oregon, but it’s clear that there is some legitimate wealth to be made if you go play for the Trojans. Many of the country’s top prospects come out of USC’s backyard, and if they begin to dominate on the NIL-front, there is really no telling what they’ll be capable of.

In the last ten years, USC has lost out on major quarterbacks, something that Pete Carroll never allowed of the program. You can expect USC to have that swagger back, and this time it will likely be in legal fashion.

Riley knows how to recruit, and he knows how to develop quarterback talent. He oversaw the development of guys like Baker Mayfield, Kyler Murray, and Jalen Hurts. All three currently start in the NFL, and two of them went home with Heisman trophies during their time at Oklahoma.

USC is projected to have the 12th best recruiting class in 2023, and that date is still a very long ways away. Oklahoma had a top-13 recruiting class in four of the five Lincoln Riley seasons, and most of them were inside the top-9. Riley was able to recruit kids to come to play in Norman, Oklahoma, so it should be even easier for him to recruit them to sunny Los Angeles with great year-round weather and the potential to make a whole lot of money before the NFL Draft even enters their sights.