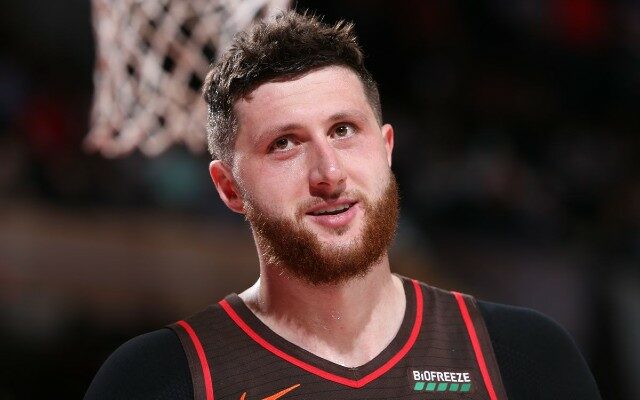 Jusuf Nurkić came over to the Portland Trail Blazers through a trade with the Denver Nuggets and a first-rounder for Mason Plumlee, a second-round pick, and cash considerations back in 2017. Since then, Nurk has been a staple in the frontcourt for Rip City.

For his career with the Blazers, Nurk has averaged 14.6ppg and 9.9rpg on 51.3 FG%. His best season as a Blazer was back in 2018-2019. Then, he was top 20 in player efficiency rating, defensive rating, blocks, and rebounds in the league. Unfortunately for him, he suffered one of the more gruesome leg injuries, causing him to miss the rest of the season and most of the 2019-2020 season. With the COVID-shortened 2020-2021 season, Nurkić needed the 2021-2022 season to regain his rhythm.

For this season, Nurkic picked up where he left off in 2018, playing right around that 15ppg, 10rpg average, shooting three percent better from the field, up to 53%. He had a relatively healthy season, too, only missing out on three games until the front office decided to shut him down and Anfernee Simons and Eric Bledsoe with the team not competing for a playoff spot.

While we can’t compare his total stats for the year, we can dig into the per 36-minute statistics, given he was shut down. If Nurk were to qualify for statistics, he would have been in 7th, with 14.1 rebounds per 36, better than Jonas Valančiūnas, Domatas Sabonis, Joel Embiid, and Deandre Ayton. He also landed 13th in total FG% at 53.5%, better than Anthony Davis, Karl-Anthony Towns, and LeBron James.

What To Do This Offseason?

Going into this offseason, the Blazers did not set themselves up for success in free agency. They have a total of -$45 million in cap space. Now, this may seem like they cannot retain any of their free agents for this upcoming season, but that is not the case. In Nurkić’s case, the Blazers can resign him via the Bird rights. A team can acquire Bird rights on a player when they spend three years with the group without leaving via free agency. The team can also go over their cap figure to resign that player, no matter how much they are in the financial hole. Spotrac estimates that Nurk will fetch $18mil from the Blazers if they use the Bird rights on him. That would put him as the 10th highest-paid center, around Myles Turner, Steven Adams, and Jonas Valančiūnas.

Let’s say they don’t go after Nurk. Unfortunately, that won’t save them any money, given that Bird Rights don’t count towards the cap figure. Unless the Blazers would dump every contract on their books (say the non-guaranteed contracts of Bledsoe and Hart), they would only have $21 million in cap space to operate with seven players on their roster. Also, Nurk is the only center on their team. They could go after some veteran minimum players, such as Andre Drummond or Hassan Whiteside, but Nurk had performed better than both players this past year.

Should the Blazers bring back The Bosnian Beast? Considering he’s healthy again, you can pencil Nurk in for 15ppg and 10rpg, which only top 10 centers accomplish. Free agency pick-ups do not look to be an option for the Trail Blazers, given they lack cap space. They also don’t have any centers on the roster, so just by that, they need Nurk. The estimated $18 million that Nurk should fetch from the Blazers is worth it, considering his talent level around those that make the same amount. Retain Nurk, and start building that roster around Hart, Dame, and Nurkić.