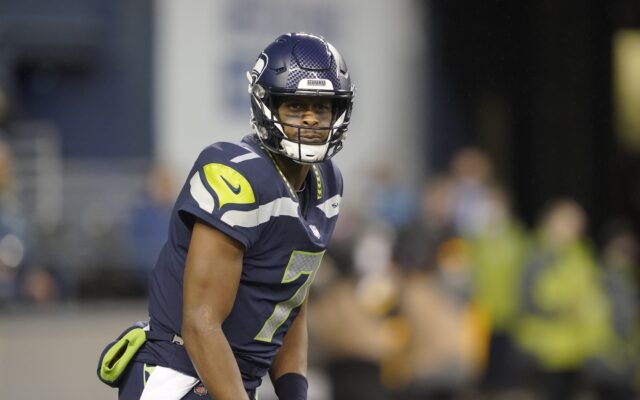 When QB Russell Wilson left late in the third quarter of Seattle’s game against the LA Rams, most fans watching assumed he had at worst a slight sting from hitting a helmet as he threw the ball. It’s happened so many times to so many QBs.

But that’s not what happened to Wilson.

Seattle’s starting QB was in the game with just over three minutes remaining in the third quarter of their week five game. And that’s the last time he was on the field as he left with a torn tendon in his throwing hand and is out for at least a couple more weeks as he recovers.

In Wilson’s absence, Geno Smith has been the starter, and overall he has not played well. While the offense worked out their new identity under new offensive coordinator Shane Waldren, they scored in large bursts with Wilson and appeared to be working up to something grand. When Wilson went down, Smith quickly went to work and nearly led them to a comeback victory over their rivals. A quick touchdown to DK Metcalf kept them within striking distance down the stretch – and the chance for a win – but all that went away when Tyler Lockett slipped, and Smith’s pass was intercepted for the game-sealing score.

Since that intercepted pass, Smith has looked off, and Seattle’s offense as a whole has followed suit. Geno finished week five 10/17 for 131 yards, one touchdown, and the interception. Pretty solid numbers for a guy that had no meaningful playing time since 2018.

In the two games since (has it only been two games?) Smith is a combined 35/54 for 376 yards and two touchdowns with no interceptions. He did fumble the ball in overtime against Pittsburgh, which led to their game-winning field goal. He had four consecutive bad plays to end the game against the Saints earlier this week. He’s been sacked ten times in two weeks, and the running game has struggled against defenses loading up the box and daring Smith to throw.

Unlike the tradition of parents “borrowing” Halloween candy from their kids this holiday weekend, I won’t sugar coat things for you. Other than the opening drive against the Saints, Geno looked awful the rest of the way, attempting only 22 passes in what appeared to be a plan to keep from throwing. Not the Saints’ plan, mind you, but it seemed as though Seattle wanted to keep the ball out of Geno’s hands. And if his own coaching staff doesn’t trust him to play when he’s called upon, why is he even there?

If Smith can survive this week, the team gets their bye week next week, and Wilson could return to play in week ten at Green Bay. Monday night’s game concluded a three-game stretch of primetime games, and Seattle doesn’t get a national stage game again until week 12 at Washington, so if the big stage is what is dooming Smith, this week is his week.

The good news for Geno is that this week’s game is against Jacksonville in the afternoon in Seattle, in their usual time slot, with the game being broadcast to just two regions. Perhaps that’s what will calm Geno down and get him back to wherever he was late in week 5? The coaches and fans can only hope so. A potential issue is WR DK Metcalf playing through a foot injury. Metcalf certainly didn’t appear to be lacking any explosive running capability in his long touchdown a week ago, but he managed just one catch the rest of the game. That lack of production can undoubtedly be attributed to Geno’s habit of tucking the ball in the face of a great passing play. Still, it can also be assumed that Metcalf isn’t able to get his usual burst off the line and get open quickly. Maybe we see a complete game from both players this week, and it’s likely going to need to be if we’re going to see a statement win over Jacksonville.

The defense certainly hasn’t done Geno many favors, but they have only allowed 33 total points in his two starts, and one of those games was decided late in overtime. We know what to expect from the defense; they will bend but not break and give him a chance to win games. But will he step up and lead the team to victory? Seattle stands at 2-5 right now; if they head into their bye at 2-6, it might not be worth bringing Russ back for a slight chance at a playoff spot. But if they can win this week, they could fly to Green Bay at 3-5 with an outside chance to make a run even with the odds against them.

When Russ left, the team had a .500 record. If the season ended today, they would be out of the playoff race and even farther out of the division race. Arizona is five games ahead of them in the standings. Do you really see them losing at least five more games than Seattle wins the rest of the way? I certainly don’t, so the division is out of the question. Even with seven playoff spots, Seattle will have to fight to get in front of LA, Minnesota, and the Saints. Keep in mind that all three beat Seattle head to head, so they will need to have a better overall record than at least one of them. The smart money is on the Saints to be the team that slips down the stretch, but with WR Michael Thomas due back any day now and a defense that can stand with any team, they might not drop. Seattle gets another shot at LA in week 15, but that game will be played in LA, where they have had trouble winning games.

Five of the nine remaining games for Seattle are on the road after their bye week, and three of those are against likely playoff teams. If they make it, no one will doubt they are battle-tested, but it starts with the game this week, and they will have to see if Geno can help them win it.

That makes this week’s game against Jacksonville a must-win. If Seattle wins, they have a chance to get back to .500 with just two wins coming out of their bye week. If they lose, that’s probably the end of their season from a competitive standpoint. It’s not likely a 3-5 team will make the playoffs, but weirder things have happened. A 2-6 team making the playoffs? Going into Sunday, they have a 12% chance based on current standings and upcoming opponents. If they win that game, their chances stand at 12%. If they lose, their chances drop to just 5%. (This is just speculation based on an unproven simulation, don’t read too much into it other than winning = good and losing = bad).

Even at 12%, I don’t like their chances, but I like that number. I hate their chances at 5% with a 2-6 record. 12 is a lucky number in Seattle, so let’s assume they win on Sunday and stand at 12% going into their much-needed bye week. There is an outside chance they could emerge with Wilson and Metcalf and WR Tyler Lockett and RB Chris Carson all close to 100%, and perhaps – a reignited offense. If that happens, look out because this could be one of the most explosive teams in the league. They can still make a run at things with an extra loss, but it will just make it that much more desperate, and you don’t want to see a battered team having to play desperate.

Let’s hope we see “the Geno Smith game” this Sunday. The game that puts the league on notice that Seattle isn’t done yet with a statement win. So far this season, they are winless at home, so this would be a great time to get their first home victory and welcome Russ with a chance at the big dance.