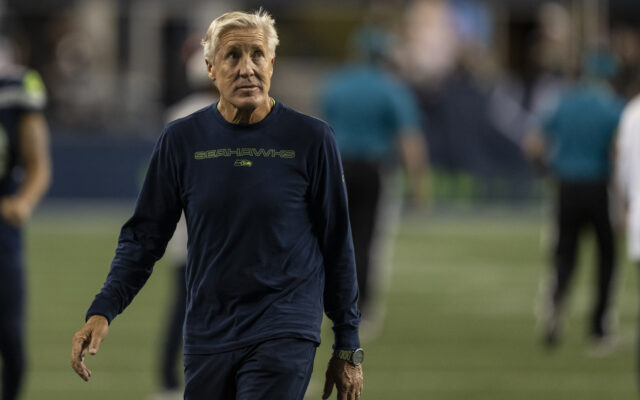 Don’t change that channel, don’t touch that dial. Those words might sound outdated (and they are), but these next words have never-ending everlasting amazing powers that transcend space and time and what is or is not trending –

This Sunday, NFL football is back. And it will be there every Sunday for the remainder of 2021. This Sunday, Seattle takes the field in their first game of the new season. As exciting as reading or saying those words is, Sunday’s game won’t be without its challenges.

Entering his 10th NFL season, Seattle QB Russell Wilson is 5-4 overall on opening day. Wilson is just 2-4 on the road in the first game of the season, and his Seahawks will travel to start the season for the 7th time in his career. He lost the first start of his career, which was on the road in Arizona to open the 2012 season. In the most recent opener in 2020, he defeated Atlanta on the road to start his 9th season. This year, Wilson will lead Seattle into Indianapolis to take on the Colts and their new QB Carson Wentz.

In Seattle’s five opening day victories during Wilson’s career, they averaged 23.8 points. In their four losses – all road losses – they average just 20 points per game. In their two road wins, they average 25 points per game. So if you see Seattle trending toward 21 points or more on Sunday, there is a good chance they are heading toward their first victory of the 2021 season. If it looks like they will fail to score more than 20 points, odds are they are creeping closer to notching their first defeat. In Wilson’s career in the first game of the season against AFC opponents, Seattle is 2-1 overall but 0-1 on the road.

Seattle doesn’t always win the first game, but it hasn’t led to season-long issues. Whether they win or lose this weekend, they know something they didn’t necessarily know for sure early in the offseason – Wilson is and will continue to be their QB. Unlike Seattle, Indianapolis has some question marks at the most important position in the game and the first one on everyone’s mind – is Carson Wentz still a good NFL QB?

To remind everyone of the kind of player we once saw in Wentz and may see again, let’s rewind the clock four years. 13 games into the 2017 season, Wentz had established himself as one of the best players in the league. Something many have forgotten is that Wentz’s 2017 season looked a lot like Josh Allen in 2020. In just his second season with Philadelphia, Wentz notched 11 victories to just 2 losses and passed for 3200 yards and 33 touchdowns with just 7 interceptions. During that 13th game, Wentz was injured on a rushing play against the LA Rams. When he got hurt, Wentz was widely thought of as the hard-working, accurate, mobile QB with a big arm and high football IQ that coaches dream of.

Since leaving the field in his final game of 2017, Wentz’s play has been erratic, to put it kindly. His stat line in the three years since is a mediocre 17 wins in 39 games while passing for 9733 yards and 64 touchdowns along with 29 interceptions. His stats might not tell the whole story. Still, his body language in games and lack of playmaking ability he showcased in his second year definitely have folks questioning his current ability.

Now reunited with Frank Reich in Indianapolis (Reich served as the offensive coordinator for the Eagles in 2017), the expectation is that Wentz can return to his 2017 form and wipe the last three years from public memory. Such a turnaround at QB would be welcome news for Reich, as he has gone 28-20 in three years at the helm in Indy, with one playoff win to show for it, and is on his third QB in four years. After walking into a dream situation with a team playing half their games in a dome and QB Andrew Luck at full strength, things have been up and down, to say the least, as Luck unexpectedly retired and Jacoby Brissett and Philip Rivers were not realistic long term solutions. Working together again this season after a three-year hiatus could be exactly what Reich and Wentz need to reverse their fortunes.

Regardless of what they hope to accomplish together this season, Reich and Wentz will have their work cut out for them this week. Even though they are the home team, they are 2.5 point underdogs so Vegas (the city, not the team) sees a struggle ahead of them against a very confident and talented Seattle team looking to put the NFL on notice after a disappointing exit to their 2020 season.

Just looking at the talent on paper, these teams should be a good matchup even if they do not exactly mirror images of each other. Both feature a mobile QB with a big arm, a strong running game, and a defense built on the success of their front seven. But that’s about where the similarities end. We can all agree that the performance gap at QB is quite noticeable, even if they have similar talents. Talent is one thing; no one is questioning the talent either player carries onto the field. However – intangibles like confidence and leadership are another thing entirely. No one is questioning the intangibles of Russell Wilson; the same cannot be said of Carson Wentz.

Seattle has one of the best QBs in the business, and that’s not all they boast on offense. They have an outstanding group at receiver, featuring elite playmakers in DK Metcalf and Tyler Lockett. RB Chris Carson is a great between the tackles runner, but he has also improved as a receiver. Pass protection could be an issue, but that’s old news by now. It’s been years since Wilson had solid protection on obvious passing downs, so he knows he’ll likely have to scramble and make some plays work that shouldn’t until the line gets some playing time together with two new starters.

On defense, Seattle has one of the best safety tandems in the league – but a huge question mark at cornerback. Their pass rush got better and better in the second half of 2020, but that doesn’t mean it will carry over with two new starters on the defensive line and linebacker KJ Wright now playing for Las Vegas. They are rolling out two new starters at corner. No one knows what to expect from defensive end/linebacker Darrell Taylor after he missed his entire rookie year recovering from injury.

No matter who Seattle starts on defense, they will need to prevent Indy from establishing the run, stay strong in coverage, and pressure Wentz into mistakes and turnovers. Russell Wilson needs to play point guard and get the ball to his bevy of talented receivers, and getting Carson involved in the passing game will only put added pressure on Indy’s defense to keep up with Seattle in new offensive coordinator Shane Waldron’s creative scheme that no one outside of the NW has seen in full action just yet.

On the other side of the battle, setting aside the concerns for Wentz, the Colts have a major problem at receiver. TY Hilton is out, Michael Pittman Jr had a solid rookie season, but we’ll have to see if he is ready to leap forward as a primary target. Parris Campbell could be the next great Colts receiver, but we will have to wait and see if he can produce at the pro level as he only saw action in seven games in 2019 and was injured and lost for the season two games into 2020. Indy has an excellent offensive line. If they can establish the run, it could go a long way in forcing Seattle to send extra defenders in the box and leave some routes open in the passing game. If they struggle to get second-year RB Jonathan Taylor going, they could be looking at many unfriendly third down situations needing a big play against a defense that knows what is coming. And they cannot afford to get into a shootout with Seattle; they don’t have the talent at receiver to do it.

It’s not likely we will see stellar play from corners Xavier Rhodes and Rock Ya-Sin in coverage, but if they can hold their assignments within reason, they could turn the tides. But if either struggle to defend the extremely talented receivers in Seattle’s offense, it could be a long day for the Colts secondary – and an even longer day for Colts fans looking for hope on the scoreboard.

On paper, these teams are close. On the field? I don’t think it’s as close as it probably could be. I expect to see Seattle jump out to an early lead, recover from a late Colts surge, and win by at least a touchdown to start their 2021 campaign off with a victory.

You can catch all of the game action this Sunday morning at 10 am on FOX.