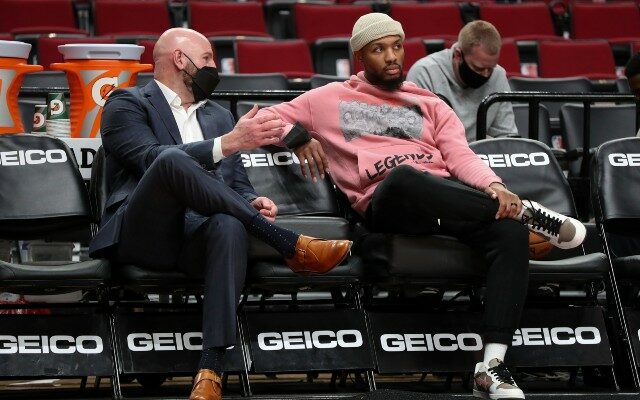 The Portland Trail Blazers enter into this offseason with a peculiar roster. They’re not in a spot to sign players such as Russell Westbrook, Bradley Beal, or Kyrie Irving, but they can make add impact players throughout. After the Blazers shaved most of their cap by trading Robert Covington, CJ McCollum, and Norman Powell, Damian Lillard makes up most of their cap next year at 72%. We all know Dame is a top-tier point guard in this league, which is why his cap hit is so high. After Dame, the rest of the team falls off hard salary-wise. Before we can look at who is possible to fit into the Blazers’ cap figures, let’s look at how the roster currently sits: 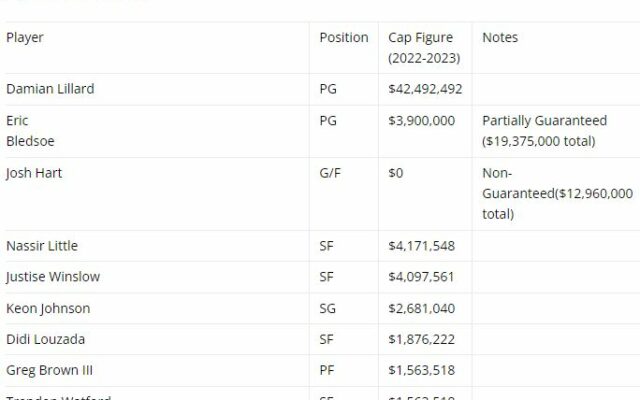 -Eric Bledsoe is guaranteed $3,900,000 of his total $19,375,000 yearly salary. How Bledsoe gets that total amount is if he remains on the roster after July 10th this year, allowing the Blazers to sign players before then.
-Josh Hart has an interesting clause in his contract that his salary is non-guaranteed, meaning he has to stay on the roster past June 25th in order to get that $12.9 million. I do believe that the Blazers will pick this up, but that opens the door for the third year in his contract, which is also another $12.9 million. This time, it would be a player option.

Birds of a Feather

The Blazers feature several players that are either restricted or unrestricted free agents, each with their own “Bird” rights. As I mentioned Bird rights in previous blogs, it essentially means the team that the player most recently played for can go over their cap to retain the player for additional years. Let’s quickly review some notable players on the Blazers that fall under this category:

-Anfernee Simons – Restricted FA – Bird: The Blazers would severely regret not bringing back Simons. He’s sure to get a max offer from another team which should land around $12 mil per year. I anticipate they will bring him back, no matter the cost.

-Jusuf Nurkic – Unrestricted FA – Bird: As with Simons, they need Nurk back. Losing Nurk would tank their entire free agent strategy. I expect him to get an offer around the $18 million per year mark.

-Joe Ingles – Unrestricted FA – Bird: Jingles was really thrown into a trade, as he was out for the season. I look for Utah to bring him back next year.

-CJ Elleby – Restricted – Early Bird: It’s a very low-risk move to bring back Elleby, who ended up in the starting lineup at the end of the year.

What Should Be The Blazers’ Targets?

The Blazers will almost certainly be at or above the cap after retaining the above players, so we’ll need some low-cost, high-output players. Obviously, every team wants that, but let’s check out three players that are realistic for the Blazers to add to the team:

-Insane rebounder and defender, but only for short stints as foul troubles haunt him.
-Would provide a great option off the bench while Nurk rests.
-Anticipated value: $5,000,000 AAV

-Increased his scoring output each of the last three years
-One of the better wing defenders in the league
-Player option for $5,300,000. Depends on if the Bucks win the championship again

The Blazers can put together a winning team with how their roster is currently set up. Their success hinges on retaining Bledsoe, Hart, Simons, and Nurk, and I believe the Blazers front office would agree with me. The trio of Hassan Whiteside, Pat Connaughton, and TJ Warren can get them more than enough firepower to get into the playoffs next year.