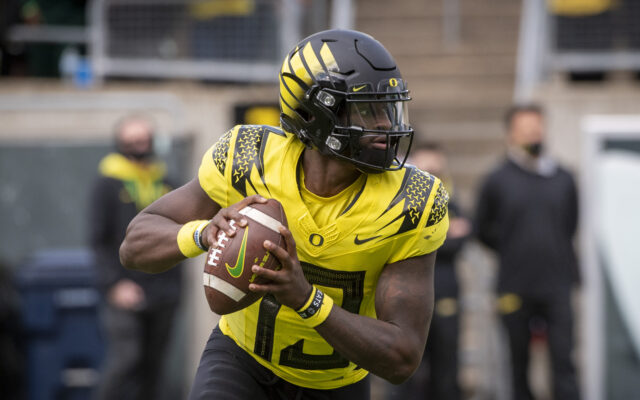 The Oregon Ducks head to Washington, coming off a 52-29 blowout win over Colorado. At 7-1, the Ducks are ranked 7th in the country. The Huskies evened their record at 4-4 after taking down Stanford on the road, 20-13. The Ducks are a 6 ½ – point favorite with an over/under of 51.

Quarterback Anthony Brown leads Oregon’s attack. He has thrown for 1,797 yards and 10 touchdowns versus three interceptions. He has a wide array of talented targets as 10 different players have at least one touchdown reception. Devon Williams leads the Ducks in receiving yards with 290, and running back Travis Dye paces the Ducks with 24 receptions. Tight end Terrance Ferguson and wide receiver Jaylon Redd each have two receiving touchdowns to lead the team.

Defensively, the Ducks have 17 sacks, led by defensive end Kayvon Thibodeaux with four and linebacker Noah Sewell with three. Safety Verone McKinley III has been all around the ball, leading the Ducks with four interceptions, returning one for a touchdown.

On special teams, kicker Camden Lewis has been nearly automatic, converting on 37-of-38 extra points and all eight field goal attempts, with a long of 49 yards.

The Huskies are led by quarterback Dylan Morris, who has thrown for 1,809 yards and 11 touchdowns after two consecutive road wins. However, he’s been prone to the interception, having been picked off eight times this season. Four different Huskies have at least 20 receptions, led by the duo of Terrell Bynum and Jalen McMillan, who have combined for 52 catches and seven touchdowns.

Washington’s rushing attack has been inconsistent. They are averaging about 120 yards per game but only 3.6 per carry. Sean McGrew has had a nose for the end zone, rushing for six touchdowns despite a relatively pedestrian 383 yards for the season. Kamari Pleasant can break big runs, averaging 6.5 yards on 40 carries.

On the defensive side of the ball, Faatui Tuitele has three of the team’s 14 sacks. Asa Turner and Kyler Gordon each have two interceptions to lead the team, which has forced 14 turnovers.

Kicker Peyton Henry has converted all 11 PATs and 9-of-11 field goal attempts. On the downside, his long is 38 yards, and he has missed both tries from 40 yards and beyond.

The Ducks are averaging 36.1 points per game and have given up 23.3 per game. Washington is averaging 22.8 points per game and has given up 18.9 per contest. Oregon has a win over Ohio State under their belts are and clearly a much better team at the moment than Washington. The key to this contest will be the play upfront. Oregon will win the battle on both sides of the ball, creating holes for the running game while pressuring Dylan Morris into at least one interception.

Washington may stay close for a while, but the Ducks have too much.