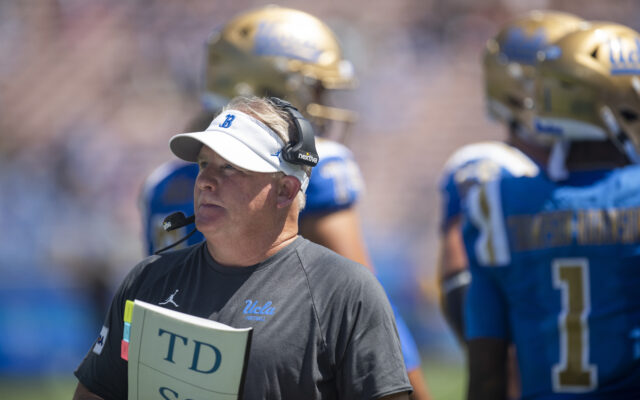 Well… Pac-12 teams lost to Montana, Nevada, Utah State, and Oregon tried really hard to lose as well. The conference’s football reputation has actually taken a further nose dive into the bottoming pit of mediocrity. But there is one saving grace, surprisingly, Chip Kelly and the UCLA Bruins. In this article, we’re going to examine what got the Bruins off to a 2-0 start fresh off of a dominating win against the LSU Tigers.

1. Da Beast – Zach Charbonnet
If you like Derrick Henryesque running backs, then this is your guy. Charbonnet transferred to UCLA in the offseason via Michigan and has proven arguably the best player in the Pac-12 in the early campaign.

Against Hawaii, he freaking trucked everyone. It was like playing Madden with Jerome Bettis back in the day; just press forward, and thou shall move. Charbonnet finished the game with six carries, 106 yards, and three touchdowns. He also averaged 17.7 yards per attempt which is just unfair.

But that was against the Rainbow Warriors; pundits wanted to see what he could do against LSU.

Against the Tigers, he did the same thing.

He continued to prove a difficult tackle and racked up big numbers. He finished the contest with 11 carries, 117 yards, and one touchdown. This time though, he only averaged 10.6 yards per attempt. If he continues on this clip, he could seriously find himself on the Heisman Watch.

2. Da Blitz
Bruins Defensive Coordinator Jerry Azzinaro has done a phenomenal job dialing up blitz packages in the first two games. Opposing quarterbacks have appeared timid, perplexed, and fearful all in one.

However, in 2021, teams are only scoring 18.5 PPG against the Bruins defense. And LSU’s offense was pretty good last year. They scored 32 a pop.

Alright, that was a lot of statistics. Bottom line is these guys have the look of something different. To be able to dominate a Tigers team with five returning offensive linemen is not only a statement to the conference but the entire country.

Azzinaro faced a lot of criticism during his first three years in Westwood. Maybe he knew what he was doing all along.

3. Da Chip
Even though Chip Kelly may be fondly remembered in Oregon, his name has been tarnished, trampled on, and all-around disrespected.

This was probably the year he was going to get fired from UCLA. At least that’s the way most analysts had it written. But Kelly seems to be on to something right now. And if he can keep the momentum flowing, the recruiting talent in Southern California is limitless.

It may be weird to say, but he could prove the Pac-12’s only hope. And If the Ducks want to have a meaningful title game, they’ll probably need to face one of the L.A. schools.

Could this be the beginning of a UCLA dynasty in football?

Not many coaches have won 46 games in four years. Not to mention four straight BCS Bowl appearances and two victories for his travels. His run in Eugene is the best thing the conference has seen in the last decade.

And the way his squad dominated LSU was no fluke. The Bruins are probably here to stay. Get used to it.