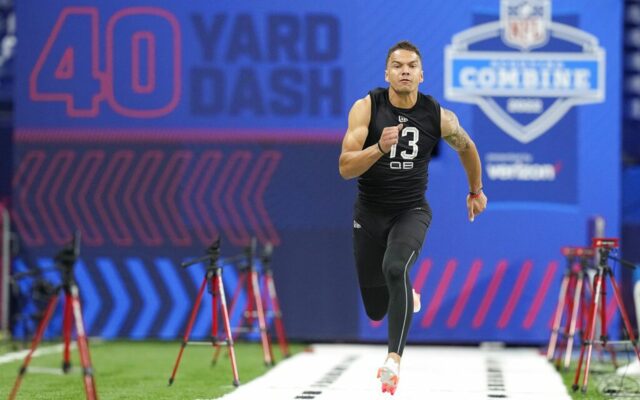 It is that time of year when hundreds of NFL hopefuls head to Indianapolis and run and jump as well as they can in hopes of impressing an NFL squad. The NFL combine is a largely overhyped event that has made for a great excuse for the NFL network to spend all their resources on content during an otherwise boring offseason. The Seahawks will be busy at work, zeroing in on prospects they will be interested in.

Realistically, the combine is used mostly for the league to have a cost-effective way to put more than 300 draft prospects through medical checks. Interviews are the second-most important aspect of the combine as high-character players with high IQs jump out at teams. The 40-yard dash, cone-drill, and vertical jumps are just an added bonus that some pundits use to call prospects busts or stars before they ever sniff an NFL field.

But clearly, the combine is important for teams to do their due diligence on many of the players they hope to draft come April. In fact, Pete Carroll had a pretty legendary story with a talented wide receiver at the 2019 NFL combine.

“They had a scout that was like my group leader, and he was like ‘When you come to our meeting, take your shirt off,’” that player said in a recent episode of Pardon My Take. “And I was like no, I can’t do that, bro. And he was like, ‘do it, he’s going to be fired up about it,’ so I said I’ll do it.”

He ended up being DK Metcalf, and that start to their relationship has been quite beneficial for both parties. The Seahawks have an important draft coming up. Last year, they had just three total selections, and they certainly didn’t move the needle after a very poor year. Seattle is without a first-round pick in 2022, but they do have an ample amount after the first round. Their picks are as follows: Round 2 (Pick 9) Round 3 (Pick 8) Round 4 (Pick 4 — from NYJ & Pick 11) Round 5 (Pick 10) Round 7 (Pick 8).

Realistically, they won’t be wasting any time on players who are likely top first-round talent unless they are planning a big move up in the draft. The only big trade they could potentially make involves Russell Wilson going out and many first round picks coming back. For the sake of this article, let’s assume that Wilson is staying put, and so are these picks.

The Hawks’ biggest needs before free agency begins are offensive tackle, linebacker, cornerback, defensive tackle, and EDGE. This entire draft class is seen as a weaker one than in years past, which could mean there are some hidden gems to be found. Here are the players Seattle should be studying up on at the combine.

Kingsley Enagbare, EDGE, South Carolina – The Hawks need a legitimate rusher, and Enagbare is a solid choice that could be had between rounds two and three. He might have a chance to bulk up and switch between DT and EDGE, and we know that the Hawks like players who can do a little bit of everything.

Drake Jackson, DE, USC – Drake Jackson racked up five sacks during his junior year at USC, and he has a knack for causing turnovers. He has shown that he can be explosive from the get-go as soon as the ball is snapped, and the Hawks are looking for athletic men on their defensive line that has been bullied over the last few seasons. He has great third-round value and is certainly worth an interview for Seattle.

Perrion Winfrey, DT, Oklahoma – Something that I really like about Winfrey is that he is a hard worker. He transferred to Oklahoma from a JUCO school and earned a starting job on the Sooners line, which can’t go unnoticed for how impressive it is. Winfrey has a big frame and could be a run-stuffer in Seattle. He had 5.5 sacks this past season and could be a guy who dips to the 4th round. He builds out as a third-round talent but could be a total steal.

Tyler Smith, OT, Tulsa – At 6’6, 332 pounds, Smith is an absolute tank. He is an anchor and has heavy and powerful hands, which are all traits you want in a starting offensive tackle. I love finding offensive line players in deep rounds. Smith started 13 games at left tackle this past season, but he was called for several penalties.

Zach Tom, OT/ C, Wake Forest – There isn’t much that needs to be said about Tom other than he is very versatile, and after all the struggles and injuries that we have seen of this Seattle offensive line in recent years, we know that having a versatile player is a massive plus.

Desmond Ridder, QB, Cincinnati – This would be an interesting pick and would likely be spent in the second round. If the Hawks want to send a message to Wilson, they will pull Jordan Love and draft his successor. Ridder had an impressive career with the Bearcats and is a proven winner. He has a lot of the same traits that Wilson has, and it wouldn’t hurt for someone to play under him.

Josh Ross, Linebacker, Michigan – Bobby Wagner isn’t going to play forever, and the Hawks need depth at linebacker. Ross is a fifth-round guy who could blossom. He is a smart and well-trained linebacker who lacks speed and size, which will drop him down in the draft.