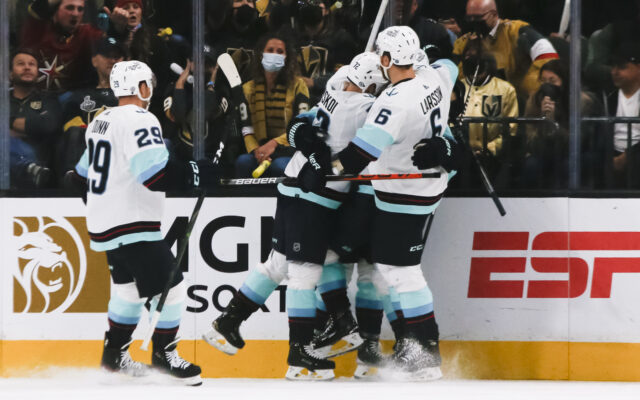 As the puck dropped on the 2021-22 NHL season on Tuesday night, the Seattle Kraken embarked on their inaugural campaign as a fully-fledged franchise in a closely fought 4-3 loss to their expansion cousins, the Vegas Golden Knights. Beyond the obvious excitement provided by the Kraken cementing their place as the NHL’s 32nd franchise, here are three intriguing takeaways from opening night.

Even in a loss, the Kraken demonstrated that they would be a difficult matchup this season. In controlling 54% of the shot-share against the Golden Knights at even-strength, Seattle dictated play against last season’s sixth-best possession team. Their forward line of Marcus Johansson, Alex Wennberg, Joonas Donskoi was particularly strong, out chancing their opposition 13-3 at five-on-five.

Although Vegas’ stars broke through in the end – Mark Stone and Max Pacioretty posted three points each – the Kraken held their own in the run of play, quickly announcing their intention to be competitive this season. Regularly maintaining a positive ledger when it comes to shots and scoring chances ensures that the team enjoys wins more often than not.

Adam Larsson was signed for his defensive capabilities and positional awareness in his own zone and showed why opponents would struggle to create offense against his pair this season.

While playing over 15 minutes at even-strength against the Golden Knights, the Swedish blue-liner controlled 62% of shots and conceded the second-lowest total of expected goals against (xGA) among Kraken defensemen. When he was on the ice, Vegas could not establish a strong scoring position and kept Seattle in the game until the end. His stick-work and imposing presence on the penalty kill helped the Kraken keep the Golden Knights off the scoresheet on the man advantage.

If the team is to challenge for a playoff spot, Larsson must continue performing admirably in his defensive duties – so far, so good.

In contrast to their first preseason game against the Vancouver Canucks, the Kraken struggled to bury chances on the power play in this game, going 0-for-3 on the man-advantage while only generating six shot attempts in the process.

Without too many legitimate offensive weapons at their disposal (Jordan Eberle is the only skater with a 30-goal season to his name), Seattle will likely rank near the bottom of the league in power play efficiency. Special teams often dash playoff hopes, suggesting that increased production from the likes of Jared Schwartz or Joonas Donskoi would help raise the team’s competitive ceiling. However, it’s only the first game of the season, and a lot can change over the course of several months.

Seattle’s opponent in their second game, the Nashville Predators, are an organization in the midst of a roster transition. The 2021 offseason saw them bid adieu to franchise icons in goaltender Pekka Rinne and defenseman Ryan Ellis, giving way to several younger players trying to establish themselves as everyday NHLers. They squeaked into the final Central Division playoff spot last season but lost to the Carolina Hurricanes in six games. In what promises to be a physical battle, the Kraken will have their work cut out for them if they hope to earn two points.