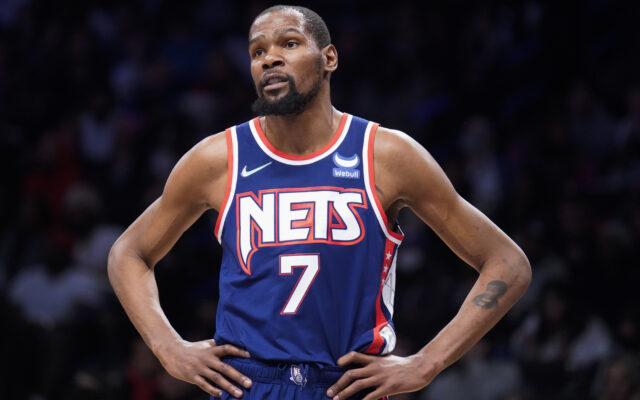 Kevin Durant announced that he wanted out of Brooklyn roughly four weeks ago, which had the NBA world scrambling. After signing his massive 4 years, $194 million contract last year, most people thought KD would retire as a member of the Nets. Flash forward to a close yet swept series by the Celtics in the first round of last year; Kevin Durant has decided Brooklyn is not the place for him. In Vegas’ eyes, the Portland Trail Blazers have a shot at KD. Let’s review what’s out there, what Portland can send to the Nets, and if they have a go at landing The Slim Reaper.

Why Would Any Team Want Durant?

Kevin Durant entered the league in the 2007-2008 season by being drafted by the Seattle Supersonics. His slight frame, yet polished shooting at 6’10”, had coach PJ Carlesimo scratching his head on where to play KD. Eventually, Carlesimo decided shooting guard was the play. Given the Sonics’ futility (20-62 that year), it didn’t matter where anyone played. KD led his team in scoring with 20.3 points per game, which became a normal occurrence going forward. The team moved to Oklahoma City and drafted running-mates James Harden and Russell Westbrook. It formed a formidable trio of athleticism that brought them to the Finals versus possibly the best version of LeBron James and the Heat in the 2011-2012 season. They managed to steal Game One but lost the next four.

Going into the 2016-2017 season, Durant signed with the already World Champion Golden State Warriors, drawing a huge amount of criticism. Amid that criticism, Durant managed to average 25 points per game, 7 rebounds per game, and five assists per game on 52% shooting, 38% from three, and 88% from the free throw line. Unfortunately, in his last season with Golden State, he tore his Achilles in the Finals versus the Toronto Raptors and missed the 2019-2020 season. He was traded to the Nets via sign and trade and made his return during the 2020-2021 season back at his same averages with Golden State. Last season, he got even better, averaging 30ppg/7.4reb/6.4apg on 52% FG/38.3% from three/ 91% FT. Durant has gathered two championships,  two Finals MVPs, Rookie of the Year, an MVP, four scoring championships, and twelve all-star selections in fourteen seasons in the NBA. Safe to say, a trade for Durant would be expensive, but you may be getting the best offensive forward in the history of the NBA.

Along with the Blazers, the Miami Heat, Phoenix Suns, Boston Celtics, and Golden State Warriors were among the top teams in the league considered favorites to land Durant via trade. However, there are a couple of barriers to trading Durant at this moment:

Recently max-extended players cannot be traded until next January-July.

The Nets cannot have three max contract players on their team.

Ben Simmons being the hang-up on most of these trades could force the Nets to give Ben away for practically nothing, but a team would have to be willing to take perhaps the most significant risk since the Nets traded for Kevin Garnett and Paul Pierce back at the beginning at the 2010s. So, taking all of these into account, including Ben Simmons not being traded, I’ve run through a couple of trades that I’ll share, as well as what the Blazers could offer.

The Celtics and Nets have been tossing around this trade for roughly a month now. The Nets ultimately declined this and rebutted by adding Marcus Smart to this trade, and the Celtics declined.

As I mentioned above, due to Ben Simmons, the Nets cannot bring in Steph Curry, Klay Thompson, or Andrew Wiggins due to the CBA. The Warriors would have to give up Draymond Green and James Wiseman to make the contracts work. In no circumstances would I ever see either team taking this.

One of the worst kept contract secrets is that Joe Harris was overpaid for his production. The three-point assassin is due to make $38.5 million in the next two years, averaging 11 points per game. I have a sneaky suspicion that the Nets desperately want to dump this contract. With Kyrie always having a foot out of the door, maybe the tough love of Chris Paul helps here, along with one of the best wing defenders and promising young stars in Mikal Bridges coming back in return. However, I don’t see this going anywhere compared to the Boston deal.

This trade allows the Nets to wipe their books of KD quickly. The contracts of Hart and Grant would be done by next year, freeing up $33 million while retaining the potential of Nassir Little. The Blazers add KD to pair up with nelly resigned Nurkic, Simons, and Dame, which immediately puts them into playoff contention.

The general consensus is the Nets aren’t interested in this “wiping off the books” and want to contend next year. Therefore, the trade with the Celtics would still be the most flavorful of the group. For fun, I played around with three team trades to get Simmons out and ended with this crazy trade:

Indiana takes the most significant risk here, so maybe a couple of unprotected first-rounders thrust them into the conversation. They’ve been trying to move Myles Turner for the past two seasons, but their asking price has been too high. For Pheonix, they lose out on a great perimeter defender yet form the trio of Deandre Ayton, Devin Booker, and KD. They’re scoring 140 points per game but probably giving up just as much.

I can play random trade machine hypotheticals all day, but the bottom line is this: The Boston Celtics have put together the most delectable trade. The Portland Trail Blazers’ best offer signals a rebuild for the Nets, something they are not interested in.