OSN: 3 Reasons Why The I-5 Rivalry Was So Important For The Portland Trail Blazers And The Region 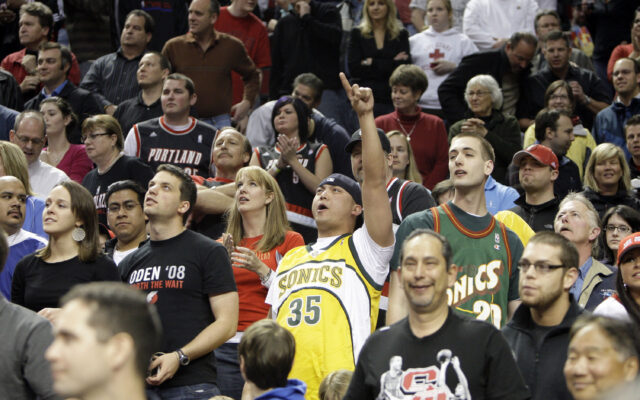 Why can’t the Portland Trail Blazers do it? Why can’t they get themselves into deep postseason basketball? Obviously, they’re already the premier team in the Pacific Northwest, but that’s by default; they’re the only ones left. Three turned to two when the Vancouver Grizzlies left for Memphis for the 2001-02 season. And two to one when the Seattle SuperSonics became the Oklahoma City Thunder in 2008-09. But has this actually hindered the Blazers? If you can’t be the best in your region, how can you be the best in the league? This article will relive the I-5 rivalry between Seattle and Portland and why it helped PDX.

People usually think of a grudge match as a game that corresponds with geographic location and historical prestige.

But what about equal competition?

There’s a reason why the Bushnell-University of Oregon rivalry hasn’t taken off.

Hopping back, there are no two teams more comparable than the American PNW squads.

Both teams have one championship, three finals appearances, and an all-time winning percentage within .001 of each other.

Adding to the bizarro-world is that their all-time playoff series is tied at two apiece. And their all-time regular season matchups stand at 98-94 in favor of the Sonics.

Both teams even won their NBA Championships in the late ’70s.

The comparisons are undeniable, and big brother’s arrogant smirk looking down on Portland may be the fuel the Blazers are missing.

Are we alike, or are we the same? Well, let’s start with the differences.

Some of Portland’s most prominent players include Clyde Drexler, Bill Walton, Brandon Roy, and Damian Lillard.

But this is where ties run deep.

These aren’t the Kwame Browns of the league.

Maybe the PNW doesn’t hold the creamed corn of basketball talent in the U.S, but we’ve had first-class talent in our right.

Drexler was once considered the Michael Jordan of the west, and the Payton-Kemp combo was classic.

However, it is fair to note that neither franchise has had the guy of guys. A LeBron James, Kobe Bryant, Jordan type.

The PNW needs to change that.

Let’s be honest, we may be a little crazy about recycling here in the forest. And our pronouns may be exaggerated.

But it’s cool to be on this side of the tracks, and we’ll stop there.

Beyond the coolness of our awkward culture, our region could really use a championship. Outside of the Golden State Warriors, the PNW is looking sparse talent-wise.

The Sonics are gone, the Blazers are rebuilding, and Russell Wilson is in Denver.

People may view the west coast as soft, but don’t mistake our empathy for dispassion.

The Moda Center has continuously proven one of the best venues in the NBA, and KeyArena used to rock.

Our hoops culture is strong here in the PNW, but we can’t let it die.

No one knows what Portland’s future holds, and the whispers of the Sonics’ return feel more frequent.

As Taylor Swift said, two is better than one.