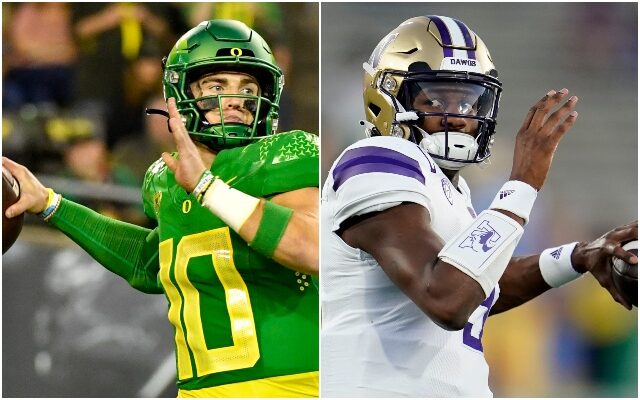 Bo Nix and the Oregon Ducks face Michael Penix and the Washington Huskies on Saturday at 4 p.m. on FOX (AP Images)

It is Husky Week.

The Oregon Ducks, poised to move up in this week’s College Football Playoff rankings, host their rivals to the North on Saturday at Autzen Stadium.

Details on television and kickoff times were announced Sunday.  FOX will again broadcast the Ducks for a fourth time this season, and third time at Autzen, having done so in the home wins over BYU and UCLA and road victory at Washington State.

The game will kickoff at 4 p.m.

Oregon has opened a near two-touchdown favorite, favored by 13.5 points, per Caesar’s sportsbook.

The initial College Football Playoff rankings had Oregon at No. 8.  Then, No. 4 Clemson was dominated by Notre Dame and No. 6 Alabama fell in overtime at No. 10 LSU, while No. 1 Tennessee lost at No. 3 Georgia, opening the door for the Ducks to move up in this week’s CFP Rankings.